Processed a few of the pears from those that Paul had picked up off the ground.  They were sitting on the picnic table for three (or was it four??) days and half of them were already starting to rot.  The goats and chickens were appreciative of my procrastination.

What I did get peeled & cut up really wasn't enough to do a canner full of seven quart jars, so I figured I'd experiment a bit and make some pear jam.

Pear jam always sounded weird to me.  Or pear sauce (because you know, apple sauce doesn't sound weird....go figure).  But I also had another item I wanted to experiment with; Instant Clearjel.

Instant Clearjel is a modified starch thickener. I bought some a while back when I was trying to thicken up my runny goat milk yogurt and then just recently realized that I could use it to make jams & jellies.

I got two and a half pounds of pear chunks.  I measured out 3 3/4 cups of sugar and mixed in 4 tablespoons of the Instant Clearjel and a heaping teaspoonful of cinnamon.  Put the pears in my jelly-making pot (i.e. old, thick bottomed pot) then poured the sugar / Instant Clearjel mixture on top & turned on the heat. When the pears started to heat up, I took the potato masher to it and smooshed it up a bit & stirred the sugar around.  It didn't take long for it to jam up.  You don't have to boil jam when you use Instant Clearjel so as soon as everything is mixed up evenly, you can turn off the heat. 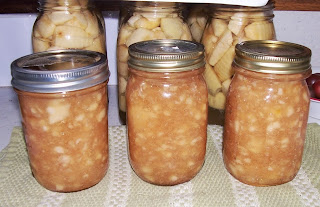 I put the hot jam into jars clean/sterilized jars and processed them in a water bath canner for 20 minutes.  I just now heard the first "ping" of my jars!  Oooo!  There goes the other one!!

I'm not exactly sure how the processed jam turned out if the extra heat degraded the jelling of the Instant Clearjel or not.  When I open one up I'll let you all know.  The leftovers that didn't fit into the jars was slathered on a piece of toast and immediately consumed by Rhiannon and I and the rest was crammed into Hillbilly Tupperware (i.e., used yogurt cup with lid) for later, or not-so-later use.

And according to the website where I buy some of my bulk foods (www.nuts.com), Instant Clearjel has a shelf life of six months whereas pectin has a year long shelf life.  So not so good on the storage aspect either.

The Instant Clearjel also cannot just be "dumped" into a recipe; it has to be mixed in with other dry ingredients so it doesn't clump up as soon as it hits the liquid portion of your recipe.

But you can use Instant Clearjel for other things like gravies and cold items whereas a cornstarch or tapioca needs to be heated to thicken up.  Can't so much do that with your box of pectin, so Instant Clearjel gets a gold star for being a multi-purpose product.

And if you're a really impatient kind'a person, the jam or jelly cooking time is decreased as you don't have to get it to a boiling point before it starts to jel up.  And if you're not going to can your jams/jellies, you can just spread that gooey goodness right on your toast and shove the rest in the fridge.  Or in your maw.
Posted by Carolyn at 8:25 AM