During our Carnivore Kind'a Christmas, we dealt with lots and lots of meat.  Shot some squirrels, roast a goose, made venison sausage, smoked half of a beef brisket and started a brine on the other half of the brisket to make homemade Pastrami.

I just looked up a Pastrami brine online, trimmed most of the fat off it and soaked it in the brine for six (I think) days in the fridge.  Took it out of the brine, rinsed it off and rubbed it with a now-forgotten dry rub consisting of salt, pepper, garlic powder, crushed coriander, mustard seeds, dry mustard and brown sugar (I think).  Paul put it in the smoker and several hours later, we had our first pastrami!

We didn't have the patience to wait until it cooled off - Paul sliced right into it and we chomped down.  After sampling our efforts, it was wrapped up and put in the fridge to cool.  Eventually we hauled out the super-cool meat slicer my Dad gave me last year for a Christmas gift (or was it the year before??) and sliced it up:

I ran out to the grocery store to get some rye bread, swiss cheese & Thousand Island dressing.  Found some canned sauerkraut in the pantry, then set about to making a Reuben Sandwich. Well, I started out making a Reuben Sandwich and then Paul pointed out to me that a Reuben is made with corned beef, not pastrami, and he refused to let me put the Thousand Island dressing on his sandwich.  Then I decided to fry up some onions in bacon grease and then fry the sauerkraut up with it instead of just plopping the plain kraut on the sandwich.  So it wasn't really a traditional Reuben Sandwich. 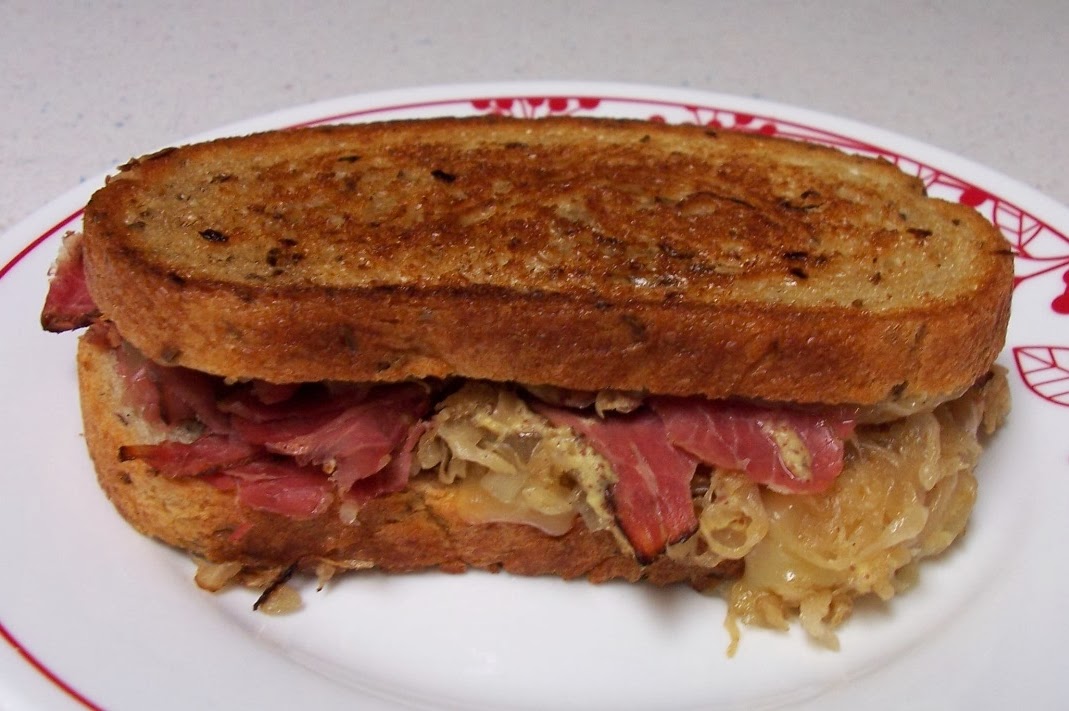 But then again, we're not your traditional kind'a folk, now are we?

We're continuing our quest to make & process as much of our own foodstuffs at home, and being able to make lunch meats is a very nice addition to the larder.  Sometimes I crave soup and sandwiches for lunch or supper (heck, even breakfast) and sandwiches are a quick and easy meal to make for Paul's lunch.  The meat slicer has made all of this infinitely easier, although one could simply thinly slice the slabs of meats, it would just take a little more time.  We've also been able to buy larger chunks of meat from the store and slice it up at home vs. buying lunch meat from the deli and it saves quite a bit of money.  Of course, we don't eat the entire five pound mound of freshly-sliced meat.  I package it in sandwich sized zippy bags, squeeze as much of the air out of it, and pop them in the freezer.  The smaller sizes ensure a quicker defrost time as well as ensuring that we eat all of it before it goes bad.

I doubt that we'll tire of the pastrami though.  If anything, I think we'll try and find someone with a butcher steer and see if we can get another brisket from it.
Posted by Carolyn at 10:20 AM