I've got something of a routine down when it comes to raising a batch of laying hens.  When the day-or-so old chicks arrive here, they go into the small kidding pen with a heat lamp for about a month.  When they run out of room or when the heating lamp is no longer needed (whichever comes first), they get relocated across the hall to the large kidding pen and will stay there for a month or so.  Or in this case, until I need the kidding pen for, well, kidding.

It's been three (or four?) days since I opened the slat in the large pen door in order to allow the new Rhode Island Red (RIR) pullets to stretch their legs and explore the great wide open.  At first, they were obviously skeptical of my removal of the board keeping them from the rest of the chickens and goats.  Lots of curious chickens craning their necks to peek at what lies outside of the barn, but none convinced enough that it was safe to leave their home area of the past four months.

That is until I stopped putting feed in the pen and scattered some cracked corn outside of the pen: 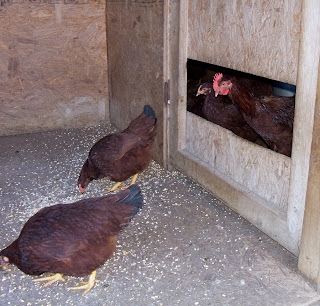 It didn't take long for their gizzards to trump their uneasiness and one after one, they hopped out of the pen to peck at the corn.  It didn't take much long after that for the goats to find their way to the corn either; stinking gluttons. 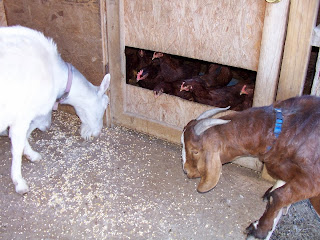 I think all of them have been out and about the barnyard at one point or another.  There's a lot of chicken squawking as the older hens are having a field day teaching the younger ones who's boss, but nothing horrible.  I've even seen a few of them manage to find their way to the main chicken feeder located outside of the goat / chicken yard.  Some seem much more willing to explore than the others, but I'm hoping that they stick close to home because our resident red tail hawk has been hanging around again and I'm sure they'd be an easy snack.

I finally managed to hook up a light in the main coop and have been turning it on before dusk.  But since the kidding pen is still open, the younger chickens continue to roost in there at night.  I figure I'll give them another few days of access to the pen then hope they'll be smart enough to seek out the light in the main coop and roost in there.  Smart?  Chickens?  No such thing.  So in reality what is going to happen is that come dusk they will all congregate in front of the closed kidding pen door and I will have to hand-deliver twenty chickens to the main coop every evening for several weeks until they finally get it.
Posted by Carolyn at 4:52 AM