There was a storm that hit the local boat docks last year and our neighbor's pontoon boat was damaged.  Since it was an older pontoon, they decided that it wasn't worth the money to fix it so they started disassembling it to take it to the scrap yard.  One of the pieces that came off during the deconstruction phase was the aluminum awning.   When I saw them working on it one afternoon, I finally got the nerve to ask them if I could have it for whatever they thought they'd get in scrap for it.  Not because I wanted to take it to the scrap heap, but because of the potential I saw in it.

Of course, my wonderful neighbors said, "Go ahead, take it, just come and get it whenever you want!"  Well, this past weekend was finally that "whenever" day.....prompted by seeing them back out there taking more pieces off the boat.

Paul drove the tractor up the road, strapped the awning on and hauled it back down to our place.

So.  What do I want with an old aluminum awning from a pontoon boat, you ask?  Well, I'll tell you!  Eventually.

The goats are picky little buggers.  And when it rains, they decide that they just cannot stomach even a single mouthful of hay that got in the least bit moist (effers, I told you).  At one point I had made a hillbilly hay shelter right before one of our numerous snowstorms this past winter.

And it worked ok.  Except that I cut myself like fifteen times on the metal roof edge and it wasn't very stable as the cattle panel fence was two sides of the structure and the goats pushed on the fence therefore occasionally causing the metal roofing to fall off.  It eventually came down, although I don't recall if I took it down, if the wind blew it over, if it finally collapsed under the weight of the stupid snow/ice we had this year or if Paul was sick of looking at it and got rid of it.

Anyhow, I was still in need of some type of roof or shelter to put the goat's hay.  And that's where the pontoon awning comes in: 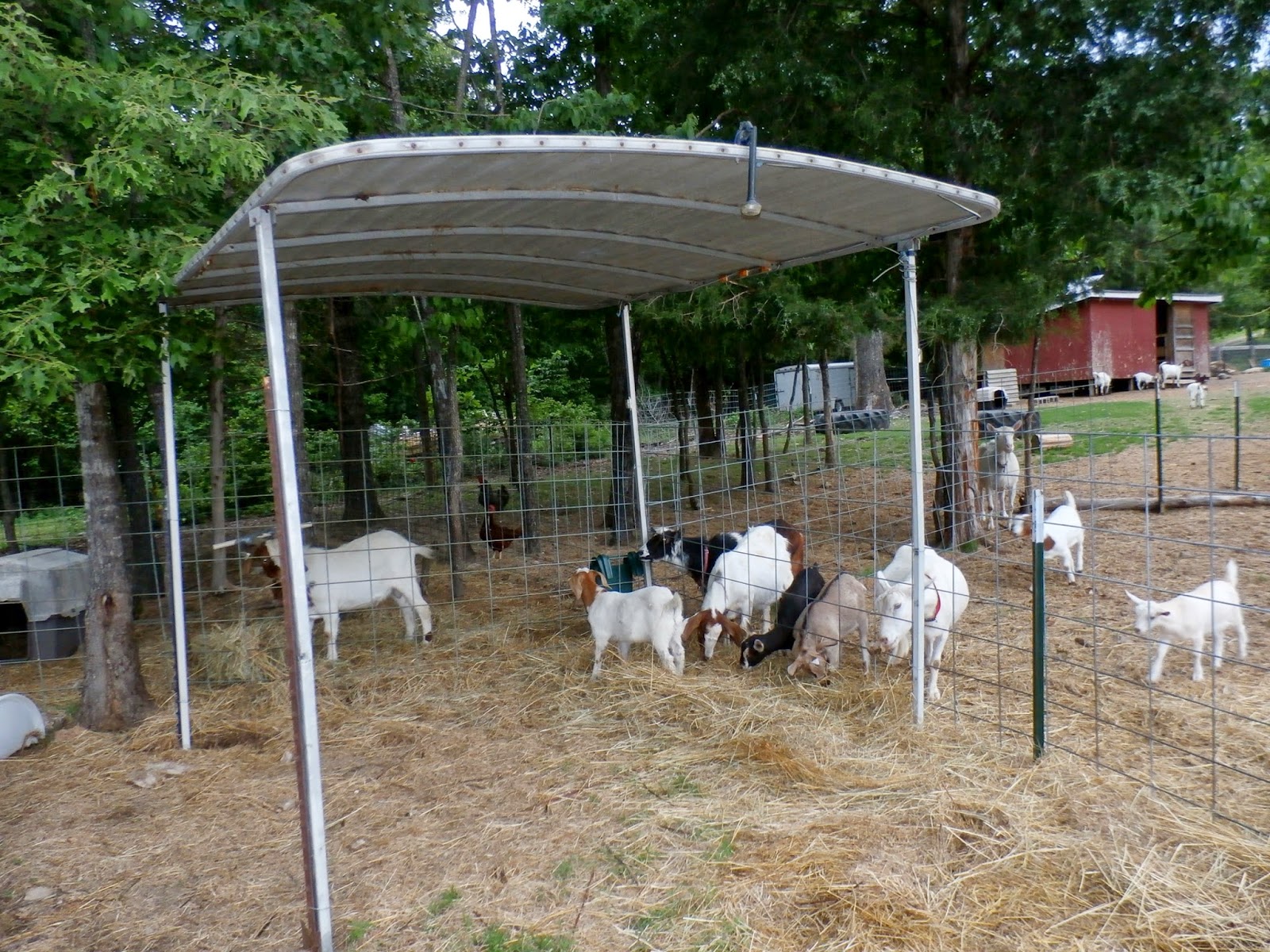 This keeps their daily hay rations pretty much dry and that was tested out just one day after Paul put it up as we had a pretty big storm come through Monday night and into this afternoon.  The awning posts are tied with wire to the t-posts and set in the corner so it keeps both the girl's hay dry as well as Herman's.  I'm also debating on whether or not I want to attempt putting an entire round bale underneath there or continue forking hay to them twice a day.  The lazy sloth in me wants to put the whole bale in there so I don't have to feed hay every day, but the cheapskate in me knows that if they know that there's an entire bale for them that they'll be picky bastards and waste even more (if that is even physically possible) hay.

The only problem with this new setup is that snow will be a problem.  But I suppose I'll tackle that dilemma later.  Like, next winter, a day before we're predicted to get a foot of snow
Posted by Carolyn at 8:44 PM