I swear that I did a blog post on my encounter with the most fearsome looking hornets I've ever encountered, but apparently I didn't.  Which is strange because I freaked out about this bug for about three days:
Around the end of May, I  noticed two or three of these buggers buzzing by me while working in the yard.  Then I noticed at least two of them checking out the front porch.  At first, I though that maybe it was a Cicada Killer (you'll learn about that one tomorrow), but it wasn't colored the same.

Of course, I made a bee-line (ha!) away from wherever this behemoth bug was, but it kept hanging out on the front porch.  So I pulled on my big girl panties and grabbed a flyswatter and waited for it's return.  Which it did, right in my face.  Not like an aggressive kind'a fly-by, but more like a "Oh, it's just you" kind of investigations.  But I didn't care.  This thing was going to die.

After several minutes of fly-bys and me flailing my swatter around like a crazed woman, swearing the entire time, I managed to hit it.  And it felt like I hit a golf ball.  Whoo-hoo!  Score one for the human.

Except now I didn't know where it was.  I know it went someplace near the front steps, but I couldn't find it.  Normally I would chalk it up to "It will die eventually" like I do with the smaller insects, but there was no way I was going to leave a possibly-only-half-dead gargantuan hornet walking around where both my child and I walk around (usually in bare feet) for it fully recover and seek it's revenge.

After a solid five minutes of frantically searching I found it.  Only half dead.  So I scooped it up into a canning jar and we studied it.  And found out that it was a European Hornet, on of the largest hornets in the United States.  They claim (whoever it is "they" are) that European Hornets will generally avoid conflict and are not as aggressive as other hornets (like the eff'n Bald Faced Hornets we have here), but that doesn't make me feel that much better.  Especially knowing that somewhere out in the woods, probably in close proximity to the house, is a nest the size of a basketball with anywhere from 500 - 700 of them inside.

When I found out that they are also known to destroy honeybee nests, that was the final tidbit of information I needed to personally decide that they would not be one of the welcome insects on our land.  Now I just have to find the nest.  If I do, I suspect my eradication efforts will look something very similar to this: 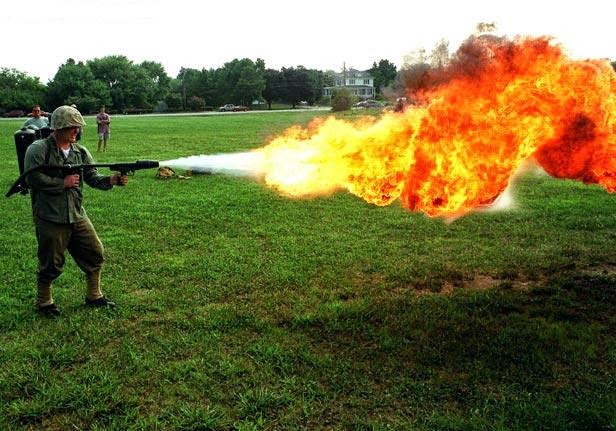