About a month ago, we noticed a few dead armadillos around the property.  Didn't think much of it as we have a bunch of them around here and didn't really mind as the buggers are constantly digging up the garden and rooting around the fruit trees.

But then we started noticing more.  And a few more.  As the summer wore on, our noses, not our eyes, were what alerted us to additional armadillo bodies.  Either that, or we'd just follow the circling vultures to their picnic of bloated and rotting armadillo flesh.

After doing some Hillbilly CSI on a recently departed (and not yet smelling so bad as to make one want to immediately wretch into one's overalls) armadillo carcass, I noticed that there were puncture wounds on either side of it's midsection.  It would have to be a pretty big mouth to get around that body.  And none of the carcasses were eaten (other than by the vultures and that was after the fact); they were just killed and left to rot.  It also seems that the perpertrator isn't killing because it's hungry (because he gets dog food with eggs & milk & meat on top).   It appears we have a Thrill Killer on our hands.  But without photographic evidence of the crime in process, I cannot positively identify the perpertrator, but I have a pretty good idea who it may be......
He's lucky that he isn't chasing down any of the livestock.  Not that I think he could actually catch a chicken unless it decided to roost right in between his big, club-like paws.  But apparently armadillos aren't smart enough to move away from him.  Have you ever happened upon an armadillo at night?  I've gone out in the woods at night to check out the strange rustling noises.  Normally when one goes to see what creature is making noise out in the woods, as soon as you get close, whatever it was sprints out of the area.  But not armadillos, and that's why I can usually tell what it is before even seeing it because the dipsticks don't bother to run away, they just keep digging through the leaves, and make quite the rukous while doing so.  I've actually poked a few of them with the tip of the shotgun.  Sometimes they get startled, other times they just trot off a bit and continue their grub hunting.

But it seems that they have not yet adapted to this particular ecosystem and the Giant Sloppy Dog that resides in it may make this particular group of armadillos extinct.  Maybe I can get to the carcassas early enough  that I can start making these things: 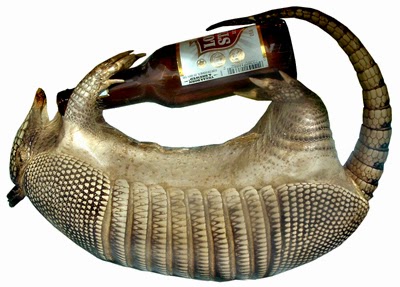 Wonder how they would go over as Christmas presents this year?  I bet my Mom would put it on her nightstand.