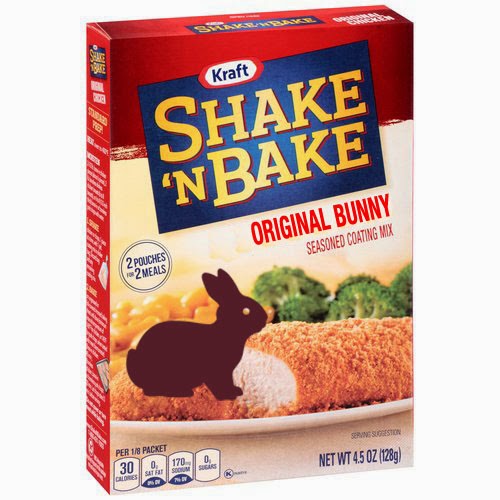 I know I used the above picture already, but I just LOVE it!  Isn't it grand having a sister that does desktop publishing for a living?

So, I made our first domestic rabbit for supper a few days ago.  Not being confident enough to even fry a chicken, I didn't want to screw up our first rabbit.  I thought about tossing it into the pressure cooker and having shredded rabbit and gravy or rabbit tacos (Kelly had my mouth watering when she said that was what she had for supper) or rabbit pot pie, but I really wanted to taste a somewhat unadulterated rabbit.  You know.  To find out if it really did taste like, well, chicken.

So I figured the easiest and most fool-proof way to cook up that sucker would be to do a "Shake 'n Bake".  But it wasn't like I could just toss the entire carcass into the the bag, so I had to cut it up.  Which I've never done before.  Enter the internet.  There were about thirteen thousand posts on cutting up a rabbit so I just clicked on the easiest looking one.  And basically, it's just like cutting up a chicken.  The only thing I changed was that instead of just cutting through the backbone, I de-boned it as not to have any more bones in supper than necessary.

I tossed a bunch of seasonings and a small glug of oil in a bag with a bunch of bread crumbs and proceeded with the "Shake" from my supper To-Do list.  I stuck the coated pieces on a greased baking sheet in the oven at 325 degrees for an hour.  The back legs definitely needed the entire hour (maybe even an hour & fifteen), but the rest could have done just as well at just under an hour of cooking.
It tasted fine, although the front legs were a bit chewy.  Paul said he could take it or leave it.  Rhiannon had the back (i.e. meatiest) pieces and ate it without even flinching.  So all in all, it was a pretty good supper, but I think I'll pressure cook the remaining two rabbits and make rabbit & dumplings or rabbit pot pie.
Posted by Carolyn at 10:03 AM