We had a busy and fun filled weekend at the County Fair.  The weather was awesome.  There have been some years when the temps were in the 90's but this time we were blessed with low to mid 70's and partly cloudy to sunny skies.  There was a little bit of mist on the first day we went, but nothing that would have kept us at home.  The mild weather was perfect for the fair-goers, but especially nice for the livestock.

And you know, that's what the County Fair is all about.  The livestock.

I don't remember attending any County Fairs growing up.  Probably because we lived in suburbia and County Fairs were substituted with  Town "Fests", which were basically carnivals, food vendors, live entertainment and fireworks.  I think our town had brought in a petting zoo for some of the Fests, but that was about all you got in terms of animals.  To see honest-to-goodness livestock, one had to travel a couple of hours west to DeKalb County's Fair or go to the Springfield State Fair.

So when we moved out here, I was thrilled to be in an area where the County Fair was really a big deal.  I mean, you hear people talking about next year's Fair even before the current one is over with.  I suppose that's what happens in more rural areas, even nowadays.  I'm glad that we belong to a community that takes pride in their pigs, gets giddy with their goats, coo over their cattle and can literally talk turkey.  And that's just the livestock.  The displays for home canned goodies, homemade pies and other delectables was awe-inspiring.  The craft section was also a sight to behold with all the quilts, although I admit that I saw one too many of those crocheted toilet paper covers that look like southern bells.  I mean, do people actually use those things?!?  Anyhow.  It's nice to know that there are still people, young people at that, who take pride in being able to actually make something with their own two hands.

Rhiannon and I visited our Boer kids that were being shown by the local FFA group and sat through some of the dairy and meat goat judging.  Our goats didn't do bad, but neither did they get Grand Champion or First Place or whatever it's called.  I think we got a second & third place (although there were only five in that group, so that really isn't saying much), but we really weren't in it for the ribbons anyhow.  But come on, who wouldn't be just a little bit proud of a big ol' blue ribbon?  I was hoping to get a better grasp of how the whole show thing worked, but didn't get involved enough with the kids (goat kids or human kids doing the showing) so that was pretty much a bomb.  I'm hoping to get together again soon with our Ag teacher friend and pick her brain about it.  Maybe we'll sponsor goats again next year and I'll let Rhiannon show one as well. 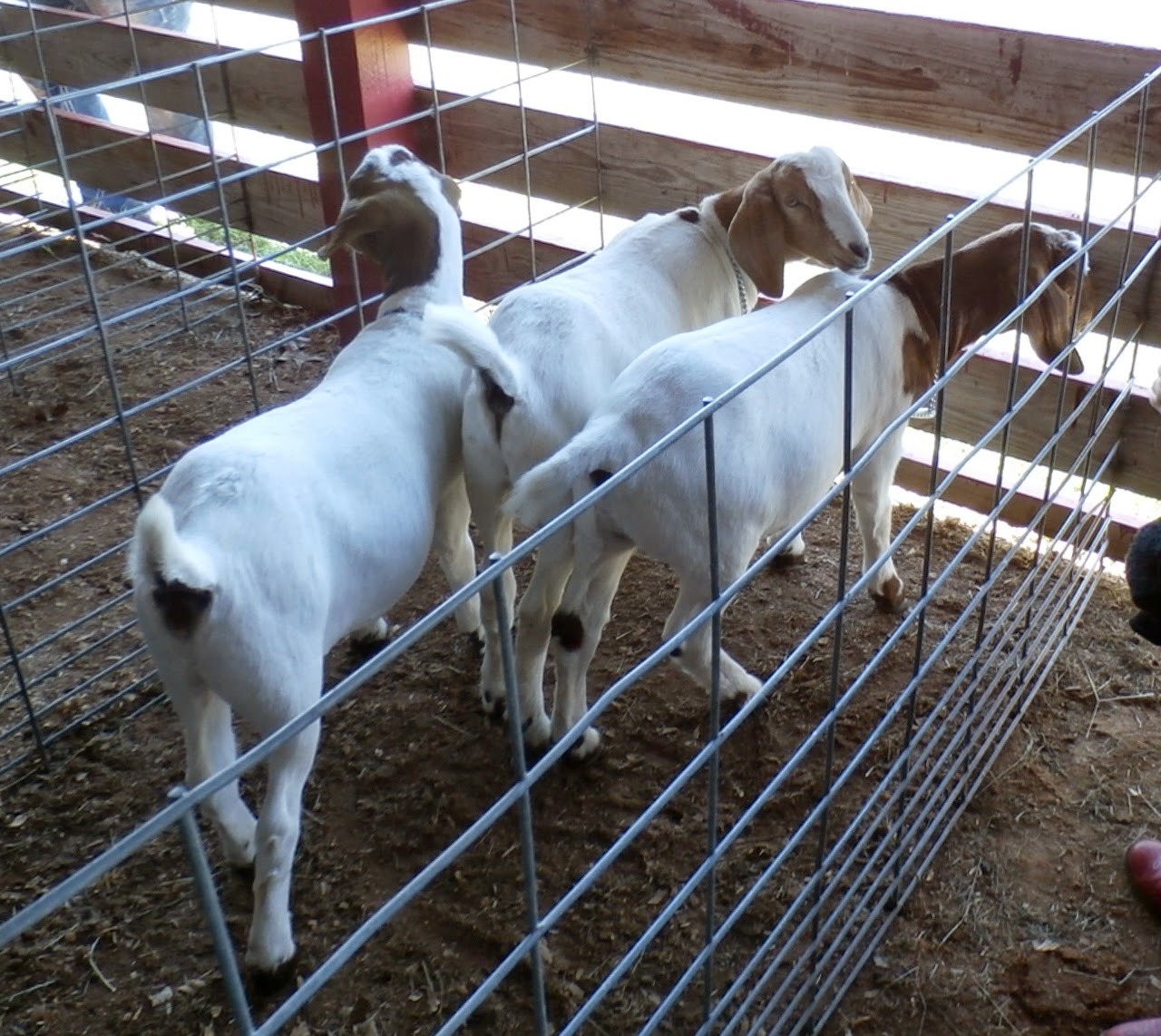 After saying hello to our goats, we did the rest of the livestock circuit; cattle, pigs, rabbits, poultry.  And Rhiannon and Grandma got up close & personal with our newest addition: 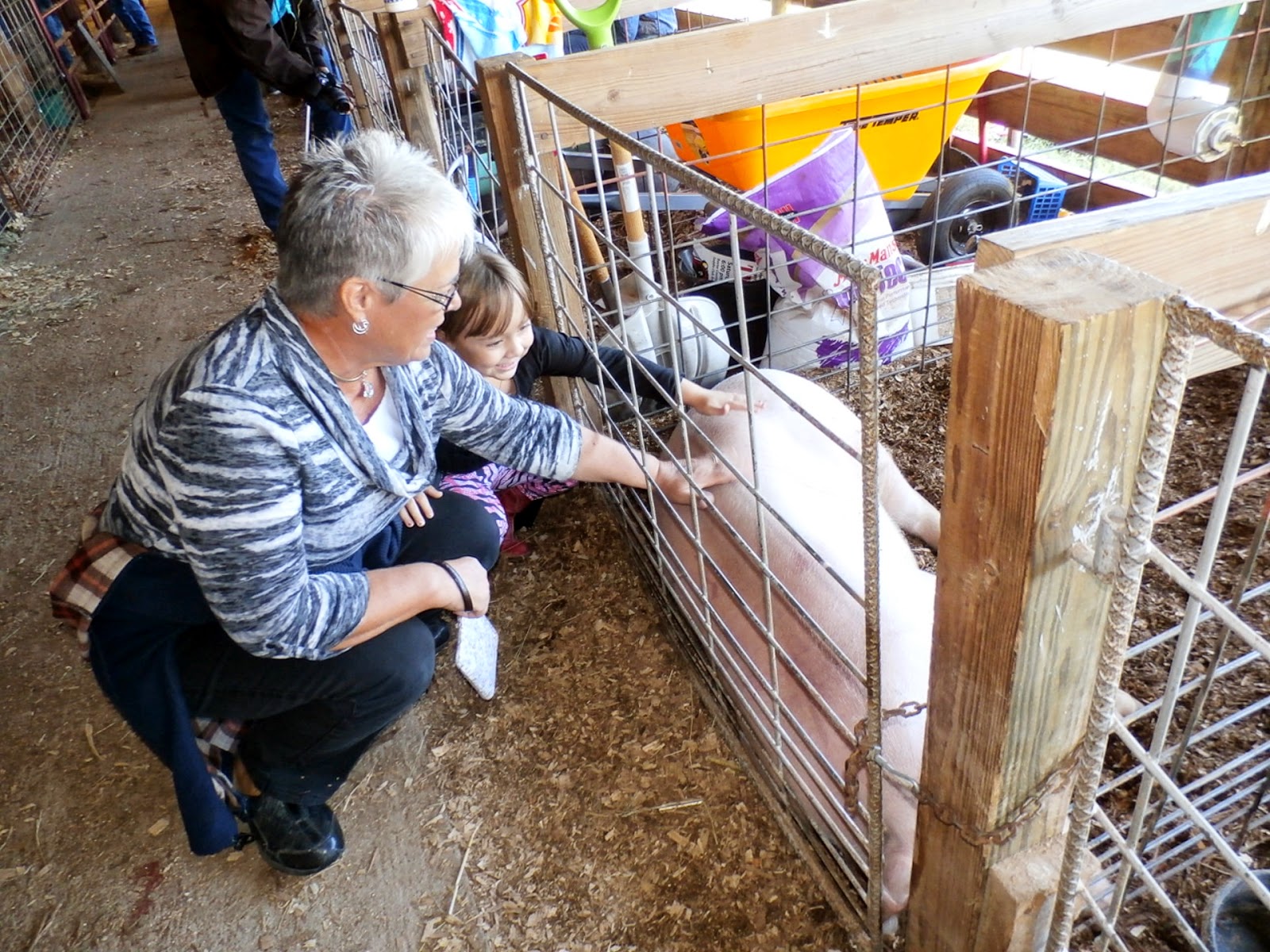 The Ag teacher heard it through the grapevine that someone wanted to sell one of their hogs so she introduced pig-seller to potential-pig-buyer, we negotiated a price and I was suddenly the proud owner of a pig.  Just like that.  Really.  Just like that.  Dangerous, being able to just go up to somebody, give them $240 and you got yourself a 240 pound pig.  I didn't have a trailer with me and I didn't have a pig pen set up.  Heck, I didn't even know what to feed this thing.  I mean, I've read (and re-read now that I'm in this particular situation) Ohio Farmgirl's"Pigs" posts, but I still didn't have any idea what we were going to do with this porker.

Luckily for me, we were able to have it hauled to the Ag teacher's barn where "Bacon" will reside until the first cold weekend when we will haul it here and put that two hundred plus hunk o' meat into the freezer.  The Ag teacher (and most likely her student underlings) will take care of Bacon during the school week and I'll take care of him on the weekend.  Sweet deal, if you asked me.  We didn't have to make a last-second, half-assed pig pen and I only have to deal with the animal twice a week.  Of course, we intend on paying back the kindness with porky-goodness conveniently packaged in white butcher paper.
Posted by Carolyn at 9:26 PM