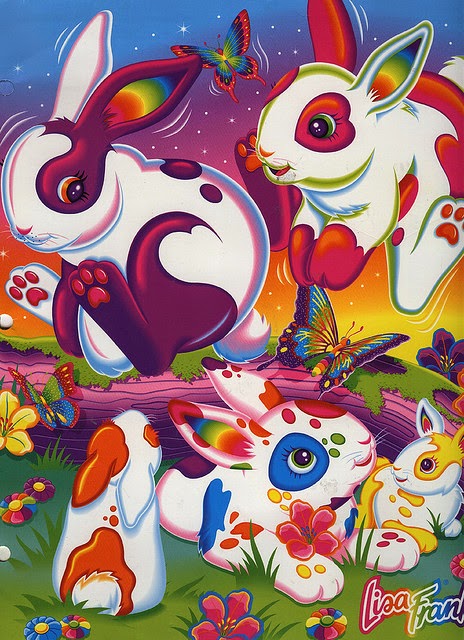 By now, you all know what's coming when that ^ is the first picture you see; butchering pics.  Normally I would have gone with a Cat themed so-cute-you-wanna-puke picture, but I saw the bunnies and thought it more fitting.  In a sick and twisted kind'a way.

If you read my last post, you already know that we were the recipients of four New Zealand meat rabbits.  I didn't have cages set up, I didn't have feed for them, food bowls or water bowls set up for them.  Because they were not going to be staying for supper.  They were going to be supper.

Never having to dispatch a rabbit up-close and personally (they are usually dead via lead projectiles when I pick them up), we asked the man who we got the rabbits from how he did it.  He said a quick, sharp blow to the back of the head did them in instantly.  So we figured if he did it hundreds of times like that, we could do the same.  Although I did question if it was more humane to be cracked in the back of the head with a nightstick than getting a .22 in the skull.

Paul grabbed a rabbit out of the cage and held it up by it's back legs.  It kicked for a bit but once it settled down he took the nightstick and gave it a firm crack right between the head and the shoulders.  The rabbit was dead instantly.  There was a little bit of twitching, but no more than I would have expected had use used a firearm.  And this was obviously much safer.

Skinning & butchering rabbits is a cakewalk compared to just about any other animal and this is the main reason we even contemplate raising them for the freezer.

Once the rabbit was dead, Paul held it over the gut bucket (i.e. 5-gallon bucket) to catch the blood.  There was more than I had anticipated given we didn't slit it's throat to drain it, although subsequent rabbits' throats were slit because there was a little blood in the carcass of the first one.  After the blood stopped, he put it on the cutting board and started the skinning.

Rabbit skin is very, very thin.  If one were so inclined, I bet you could skin it without using a knife by just tearing a hole in the hide and ripping it off.  But we opted for using a knife.  Paul pulled the skin on the middle of the back and made a slice through the fur/skin.  Normally when we skin an animal, we'll cut through the hide up through the belly, but rabbits have very little muscle in this area and it would be very easy to cut right through the belly and into the stomach / intestine.  You don't want to cut into the guts and chance contaminating the meat.  So by cutting the back, we totally avoid any mishaps.
After the slice was made in the back skin, each of us grabbed a side and we both pulled, Paul towards the head and me towards the back feet.  When the hide got to the back feet, Paul used a pair of kitchen shears to cut the back feet off.
On the other end, when the hide got to the front legs, you just poke your finger or thumb through the armpit and peel away the skin.  Then you continue pulling the hide up to the skull.  Once we got to the skull, we used the shears to sever the neck and that was it!  The only fur left on the rabbit was the tail. 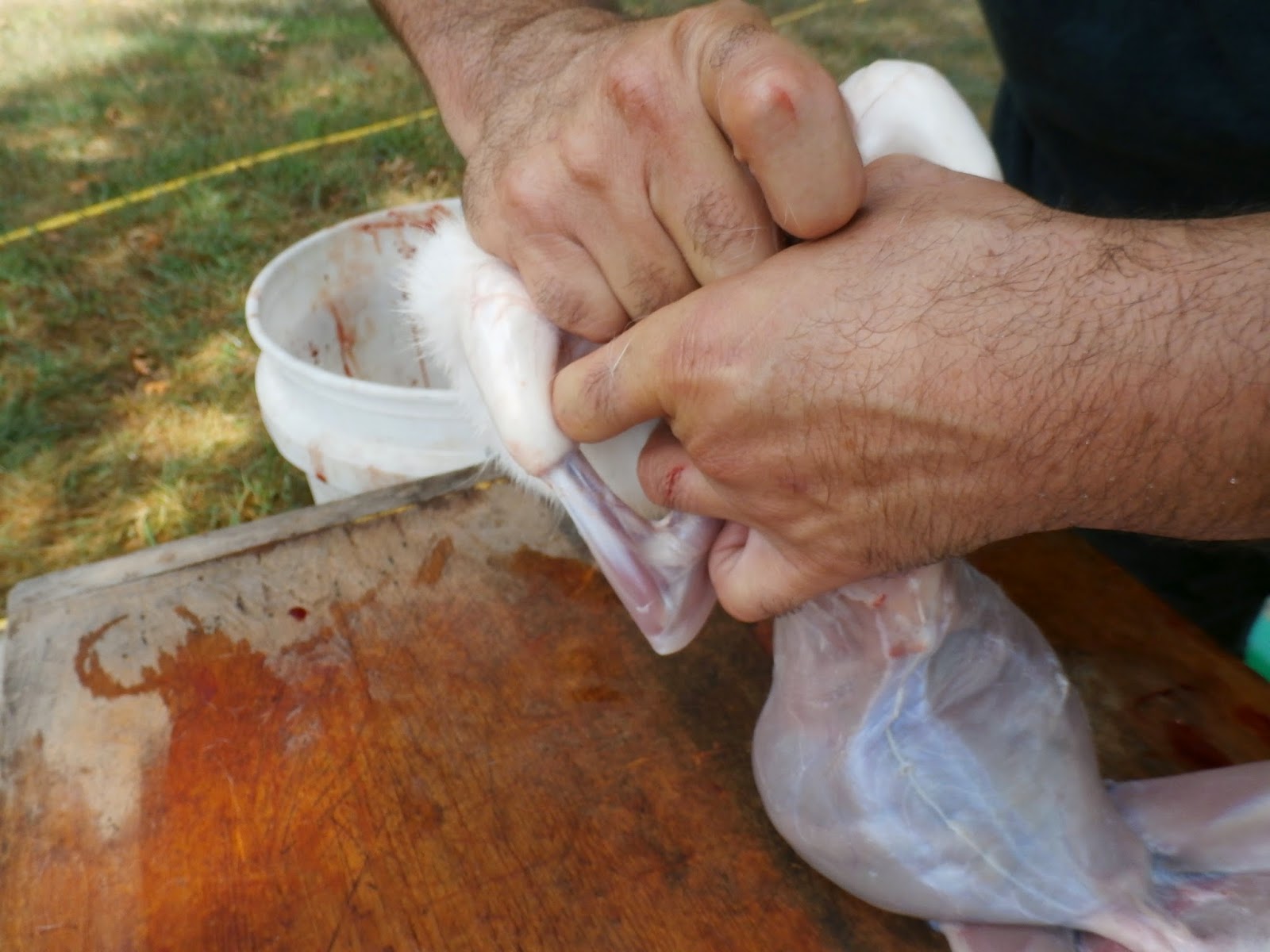 I didn't get any pictures of the gutting, but it basically goes like any other disembowelment.  Make a slice through the abdomen muscle (Carefully!  It's very, very thin.) up to the rib cage, being very careful not to cut into the stomach or intestines.  Then cut through the ribs (we used kitchen shears) and shove your hand up in there and pull everything out, down towards the back legs.  Don't keep yanking though, because you need to make a cut around the tail and anus to release the intestine/colon/anus from the animal without spilling any of the contents (i.e. pee & poop) and contaminating the meat.

Once all the insides were outside, we cut the gall bladder from the liver and saved that (the liver, not the gall bladder) and the heart.  Liver for me, heart, kidneys, lungs for Charlie.  Gave the carcass a good hose-down and put it into a bucket filled with ice water.

After Paul finished the second rabbit, he asked if I wanted to kill one.  Well, I really didn't want to (not because I'm squeamish, but because I'm just generally lazy), but figured I should know how to do it.  I grabbed myself a rabbit from the cage and it almost kicked out of my hand.  It was deceptively strong and I almost lost it.  Charlie was disappointed that I held on as I'm sure he would have had a grand time chasing it down and munching on it.  After it stopped kicking, I firmly held the the nightstick in my right hand, held the rabbit in my left, raised the stick.....and totally missed the rabbit and cracked my lower shin.  Yes, I heard an audible "crack".

But you would all be so very proud of me as I didn't utter a single swear word.  Paul did say that I had a very pained look on my face.  As I would expect as when I handed the rabbit and stick over to Paul and ran my hand over the already black & blue area where stick met my shin, I felt a large divot where there was no longer any muscle, but an area of mashed tissue and possibly chipped bone.  Lesson learned?  Hold the rabbit up with your arm extended straight out, as in this picture: 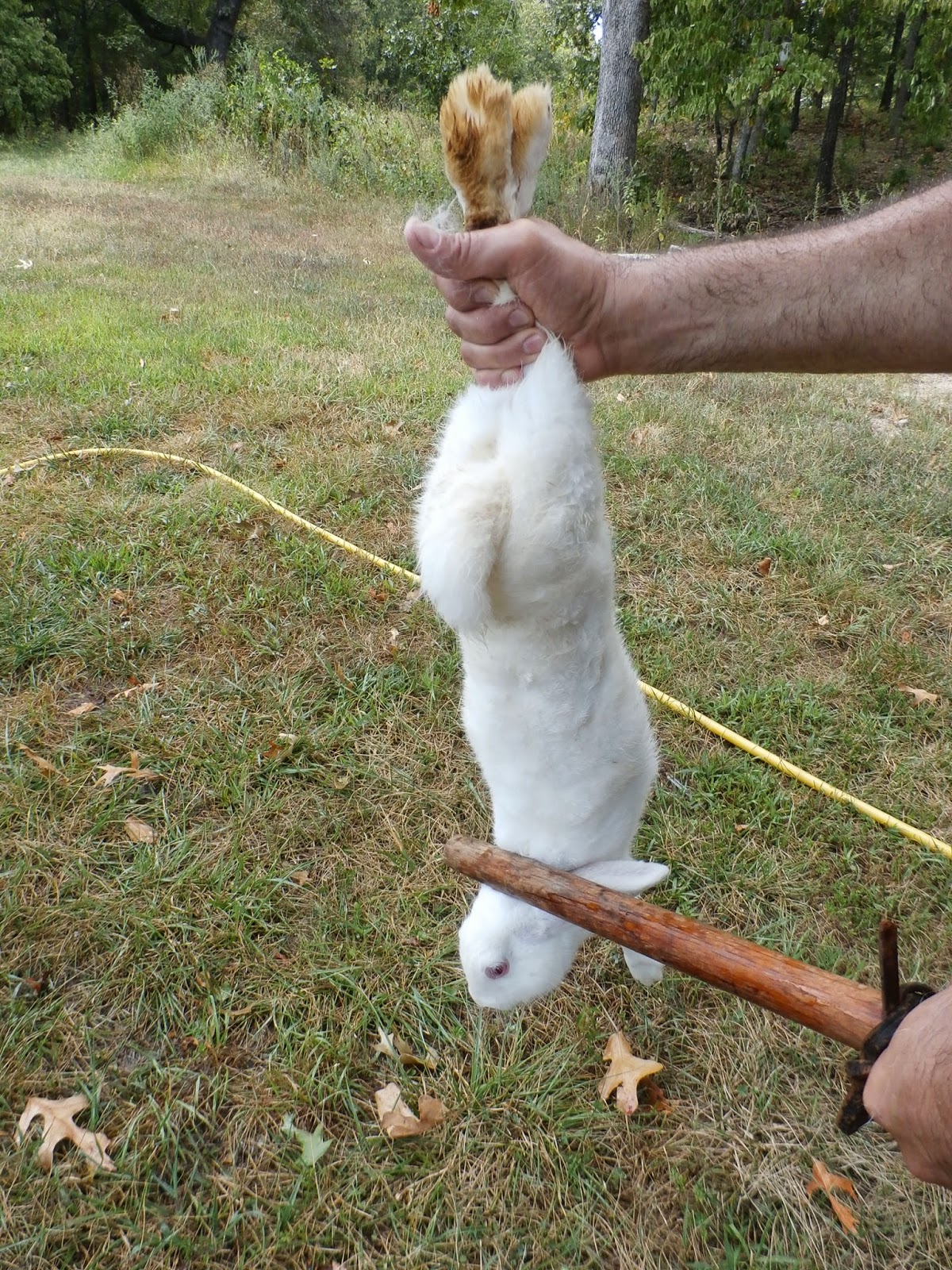 Do NOT hold the rabbit close to one's leg, like this: 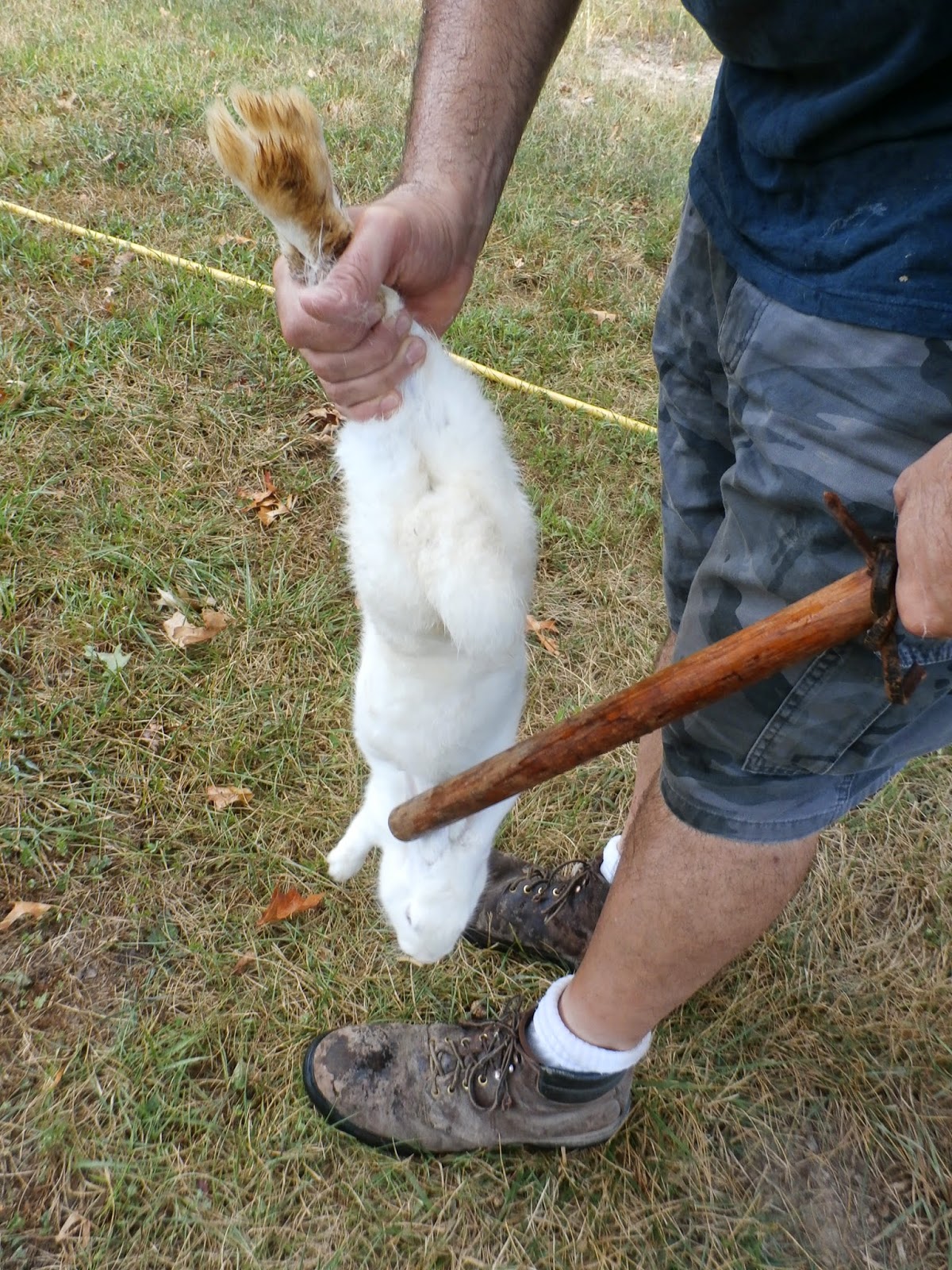 Paul says that the follow-through is also important.  Even if you have your arm extended, you may whack the rabbit, but if you continue the down stroke in a curve, you'll end up cracking the rabbit and your leg.  The remaining two rabbits were dispatched by Paul and butchered up.  While we were finishing with the last rabbit, one of Paul's fishing buddies pulled up to pick up his cooler.  This was the same cooler that was filled with Crappie a few days earlier.  And since he gave us his share of the Crappie, we gave him a dressed rabbit in return.  Pretty nice trade for both parties involved, if I do say so myself.

I weighed the four rabbits before I packaged them up.  Two weighed in at 2 lbs. 14 oz, one was 2 lbs. 12 oz and the last was 2 lbs. 10 oz..  In hindsight, I should have measured live weights so I had an idea what the live / butcher weight ratio was.  Oh well, maybe next time.

But I suppose that's the Big Question now.....will there be a next time?
Posted by Carolyn at 2:15 PM