I had it coming.  It was just a matter of time.  I was going to pay for my slothwoman'ness.

Since having Charlie, our GSD (Giant Sloppy Dog) around the homestead, our chicken homicide rate has plummeted to nil.  There hasn't been a chicken murdered here in over a year and I have to attribute that to Charlie.  Not because he's a particularly fierce dog, nor because he's being a great livestock guardian.  He is far from it.  So far, in fact, that he doesn't even go into the goat / chicken area unless coerced into it with us using a hot dog.  But he is a large dog.  He barks like a large dog, he must smell like a large dog and he pees and poops like a large dog.  All things that I suspect would lead a smaller chicken-eating carnivore to stay far, far away from.  If I were a raccoon patrolling the area around a chicken coop and happened to spy the huge steaming pile of crap deposited by the colossal community canine, I would quickly be finding myself some other coop to infiltrate.  One of our new neighbors happened to see one of Charlie's footprints on his place and told someone he thought there was a bear on this property.

Anyways.  Probably since spring, I've been lazy and not locking up the chicken door every night.  It was especially maddening when I'd close the door and then have to go back out because some of the new chickens didn't want to go inside until after dark.  Then the latecomers would congregate at the front of the locked door and squawk; practically an open invitation to become an opossum's midnight snack.  So eventually I just started leaving the door open.  This was also very convenient on the weekends when I didn't get up as early....the chickens just let themselves out.

Two nights ago, I opened the front door to retrieve some wood for the stove and almost pee'd myself when a chicken bolted from the front porch.  Strange.  We used to have a chicken that wanted to roost on the front porch, probably because the coop didn't have lights and the porch did (and bowl of dog food conveniently located close by for snacking), but that chicken has long since been absorbed into the swirling eternity of the universe.  Why did this one suddenly prefer the porch to the coop?  I looked out to the coop, listened for a while, then schlepped my slothful self into the house and back into bed.  Just before falling asleep again, I thought to myself, "What would have scared the chicken out of the coop?" and before the word "opossum" could jump the synapse in my noggin, I was out.

The next morning, PorchChicken was only a distant, fuzzy memory....or was it a dream....and I went out to feed the chickens, who were already out wandering around.  Nothing seemed out of the ordinary except that there were two hens nesting in the blue barrels instead of in the coop.  Stupid chickens....can't make up their minds where to lay their eggs.  During one of my mid-afternoon barnyard patrols I opened the coop doors to collect eggs.  And I was surprised to see a buttload of feathers on the coop floor and in the back, a headless barred rock.  Crap.

PorchChicken immediately popped into my mind and I chastised myself for being such a slothwoman and not checking on the chickens the previous night.  DeadChicken was only missing her head and a small section of her back had been peeled away....but not chewed on.  Could it be that she died in the night and the other chickens just picked at her?  That wouldn't explain the missing head though.  And I don't think a chicken could manage to peel off the skin in such a manner.  Opossum and raccoon kills are pretty much textbook....gnaw off the head, then start eating the bird butt first, moving up into the body cavity consuming all the tasty bits, then if there's time, chewing on the breast meat.  Did an opossum or raccoon manage to pull her off the roost, gnaw off her head and then have to run off with it because of the insane ruckus that was most likely ensuing in there with thirty two other crazed birds?  Well, what might have been thirty-two birds.  I had no idea if another two or twenty chickens had been pulled from the coop.  The only sign of blood in the bedding was where the headless chicken lay.  If chicken carcasses were pulled out of the coop, I would have certainly seen a bunch of bedding in front of the door.  I reexamined the decapitated bird, looking for fur or teeth marks on the neck bones but was not able to determine anything other than the obvious fact that this chicken was missing it's head.  So I cut one of it's legs off, tossed the rest of the carcass in the burn pile, and set the live trap with the severed appendage next to the coop door.  I would have to wait until dark when the chickens started making their way back home to do a count and find out what the overall carnage really was.

Around half past six, I went out to do the chicken-check.  I readied myself for the realization that I'd probably be missing more chickens, but when I opened the coop doors I was taken aback by the emptiness.  There were only thirteen.  I'd be lying if I said that I didn't drop the f-bomb.  Could something have really killed and removed the bodies of more than half my flock?

I went into the goat side of the barn where a rooster and hen usually roost.  They were there.  Along with nine other chickens.  Obviously they remembered the previous night's slaughter and decided to play it safe and roost somewhere else.  I found another set of hens in one of the goat  huts and a rooster and hen in the manger.  Although I was happy to find them, I was not happy about having to move every single one of them from their alternate sleeping spot to the coop.  In the boot-sucking mud, while it was raining, by the way.

After relocating the chickens back to the coop, I did a head count and I came up with either thirty-one or thirty-two chickens.  Just one or two short; one being the headless chicken.  So all in all, it wasn't the massive slaughter that I though it was....or that it could have been.  Needless to say, I'm back to making sure I close up the chicken door at night.

The live trap didn't produce anything last night or the night before.  Hopefully the perpetrator moved on to easier pickins....or ended up like this guy: 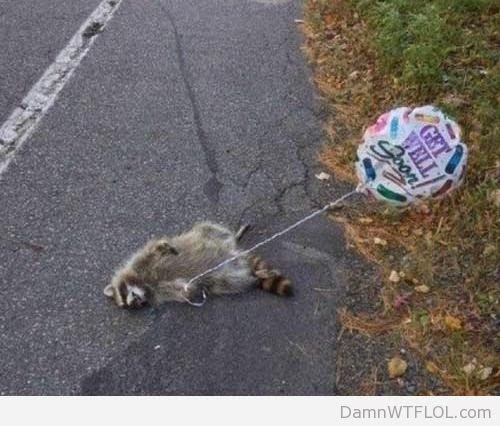