So.  Are you going to be feeding your critters a little something "special" tonight?

It's said that the animals can talk at Midnight on Christmas Eve.  I'm not sure if it's a Christian thing (the animals in the manger and all) or if it's a Pagan thing, or if it's just something a conniving feline came up with in order to get an extra helping of tuna that evening.

We (ok, well I do) give all the critters a snack before bed on Christmas Eve.  Whether it's an extra helping of grain, a carrot or apple, big ol' pork bone, or a can of tuna, I try to remember my furry friends tonight.  I'm also leaving out a can of tuna for the newest furry visitor to our porch.

He's been seen a handful of times, either near the barn, out in the woods behind the house, or even on the porch.  We seem to have another outside cat.  No, not Outside Kitty (aka, Manboob Kitty), but a different one.  Which, if s/he keeps hanging out here, will probably be given another unimaginative name....like AnotherKitty.  Which is better than what Paul has been calling it (Another Freaking Cat, Damn Cat or Get Outt'a Here Cat!).  Amazingly enough, it's not a black cat; it's a gray tabby.  It's not not nearly tame enough or used to us that he'll stick around more than a second or two after we see each other, but the Meow Mix I've been putting on the porch is disappearing every night.

Hopefully it's the new cat and not an opossum or raccoon.  My luck I'd be feeding one of those buggers.

So, back to the yapping pets and livestock.  Do people give the critters a treat as a bribe so that they don't compromise the homestead OPSEC?  Would they tattle on me and call up PETA to tell them that I kick the mean rooster every chance I get?

Now that I think of it, I'm not sure this talking animal thing is really that good of a thing.  I mean, Pickles screams goat obscenities now, can you imagine the words that would come out of her howling screamer at Midnight?  And do I really want Ms. Melman the mule to be telling me about how she has to deal with the constant sexual advances of Nugget?  Herman and Studly (the buck goats) would probably be yelling "Hey Baby!  Wann'a come over here and get you some of THIS?!"  The chickens, I imagine, would just be gossiping like a bunch of little old ladies, complaining about the lack of kitchen scraps lately.  I'm pretty sure that Black Susan would ask that she be given more comfortable sleeping quarters and catnip scented eye pillows, Evil Kitty would demand more canned food, and Outside Kitty would be telling tall tales of his bachelor (i.e. when he still had a set of nuts) days.  Charlie would probably just sleep through Midnight.

Which is probably what I'll be doing.  I guess I'll just have to keep wondering if the critters are actually talking.  Either that, or set up a tape recorder.  Maybe next year. 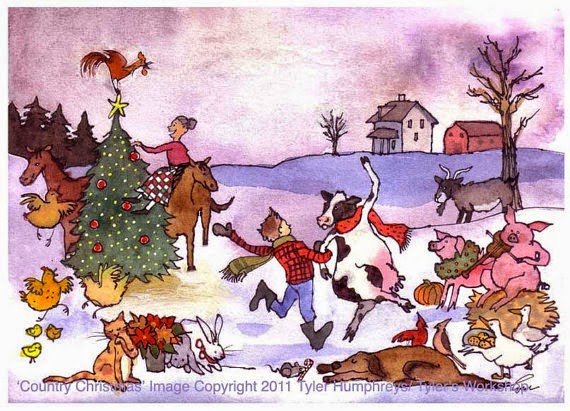