In the spring of 2007, we bought our first batch of Cornish x’s.  Once again, probably went a bit overboard and got fifty.  Which actually is just about the right amount for our use and freezer space, but it was our first time & probably would have been just as happy with half that amount.
Since it was still a bit chilly outside, we kept them in the kidding pen in the goat shed with heat lamps until the weather warmed up then they went into the dog kennel.  I was amazed how quickly they grew.   They were eating & pooping machines.  I’ve never seen an animal eat so much.  Every time I went out to feed them, they acted as if they hadn’t eaten in weeks.  I had to keep one arm free when going into the kennel to feed them so I could swat the voracious buggers away from me.  It probably took us a month’s worth of weekends to butcher them all.  We dry picked some of the first ones, thinking that it was faster than taking the time to heat up water to scald them, but quickly learned otherwise.  So now we scald about 90% of our birds; I’ll skin the others for a “healthier” meal.  The older birds were dressing out at just over 5 pounds.  We were very happy with our first batch of homegrown chickens. 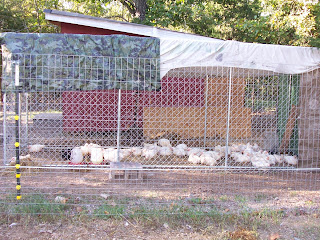 Since then, we’ve grown out / butchered two other batches.  The second batch consisted of only ten birds and they were already at butchering size.  We bought them from a local lady; she bought too many and was sick of butchering, so we got a great deal on homegrown chickens and didn’t even have to keep them around for eight weeks!
This year's batch were day old chicks from the local feed store. 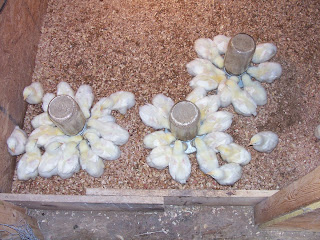 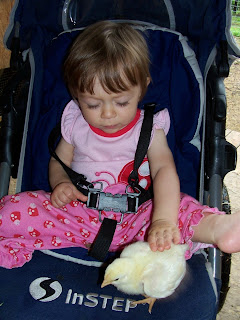 I normally like to get the chicks either in the early spring or late summer so butchering time isn’t so hot, but I was again sucked in to the store by the sign reading “We have chicks!”.  So, in to the store I go & buy 40 Cornish x’s.  It was late spring; not the best time in my opinion to raise birds, but I couldn’t resist such a good deal.  The chicks were only in the goat barn for a week, then went into the chicken tractor until butchering day. These chickens didn’t dress out nearly as large as our other batches, but I attribute it to the fact that they had to deal with a very hot summer.  I also fed them a “mash” of crumbles & water or whey (as opposed to just dry crumbles) thinking that they needed extra moisture because of the extreme heat.  So that may also have had something to do with the lower weights. We had a couple of the guys on the fire department come over to help one butchering day.  I’m going to have to invite Johnny over again next year.  He was a natural chicken “de-gutter” and could quarter a bird in a flash.  I was amazed at his dexterity at “de-gutting” and quartering.  I’d hand him a plucked chicken and a knife – and BAM!  In a whirr of hands & cleavers, the chicken was finished.  What a man!
Ducks.
Another pictorial reminder to myself that they were yummy, but messy.   We bought 10 cute, fuzzy, flappy-footed ducklings from McMurry for Fall butchering.  They were put into the dog kennel with some other day old layer chicks until it got too crowded. 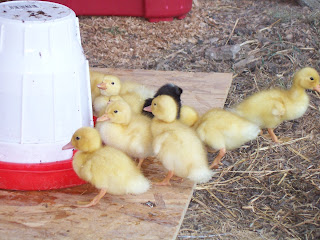 When the ducks & chicks got too big for the kennel, we put them in the garden (which was finished for the season) along with a kiddy pool thinking they could swim & drink from it.  They did.  But they also liked to clean out their bills & poop in it.  Like every ten seconds.  I would have to change the water at least twice a day.  So the kiddy pool went out & in went some shallow buckets with wire on top.  The wire was large enough to let them clean out their bills & drink but they were unable to swim / poop in it. Oh, and they absolutely hated me.  No matter how many times I went in there to feed, water or give them treats, they would run away from me en mass like crazed, insane, flapping things right into the corner of the pen & practically smother each other in order to get as far away from me as possible.  Just as well I suppose since we were just going to eat them.  We waited just a little too long to butcher.  They started getting their second set of feathers & there were a lot of pinfeathers to deal with.  As soon as I forget how messy they were, we’ll get some more.  We baked one, fried one & smoked the rest.  The smoked ones (glazed and served with an orange / brandy  sauce) were by far the tastiest duck I’ve ever eaten. 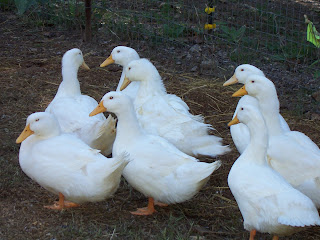