Here’s a picture of the squash I started in peat pellets indoors earlier this spring: 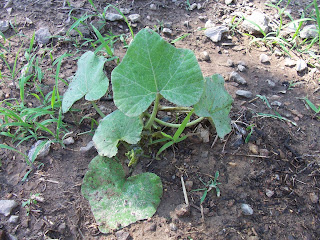 And here’s a picture of the squash seeds that I just threw into a mound about two or three weeks ago: 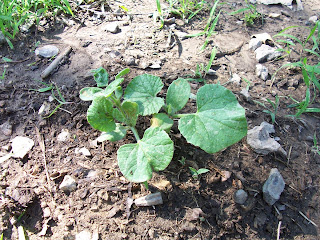 Not much difference, hugh?
Here’s a picture of my berry garden: 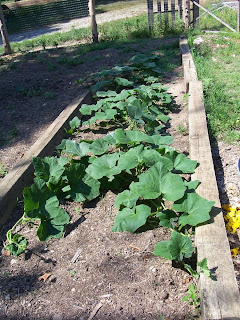 Notice any raspberry or blackberry bushes in the above picture?  Nope.  Not a one.  Because they all died.  Since this area was void of anything living, Paul put some of the zucchini plants in there.
And here’s a picture of the wild berries that are growing by the house in a mound that was pushed over to make room for the new garden spot: 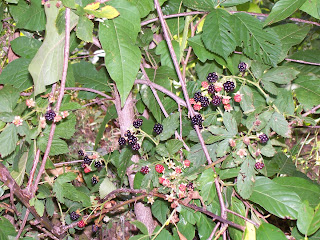 Didn’t plant them, didn’t water them, didn’t tend to them in the least bit.
And in the other section of the berry garden where there were supposed to be blueberries, we have Lamb’s Quarter.  Which I kept in there since I was determined to get something edible out of that area.
Technically, the berry garden bomb was my fault.  I didn’t water the raspberries or blueberries nearly enough last year and they just didn’t make it through the winter.  It also didn’t help that the blueberry bushes that did survive my neglect were nibbled on by the goats before Paul was able to put up a permanent fence around the berry garden.  So this year we’re planting just anything in the “berry” garden because there’s plenty of room (i.e. no stinking berries) and I’d hate to see that area just sit there.  I do plan on getting more blueberry and raspberry / blackberry bushes next spring though and will be more diligent in trying to keep them alive.
I’ve been really good watering the fruit trees though.  Probably because the hose is closer and I can just leave the water on them for a while, do something else, then move the hose to the next tree instead of just standing there waiting for chiggers.  But even though we’ve been taking relatively good care of the eighteen various trees, there isn’t a single fruit on any of them.  Not.  One.   There were plenty of flowers on all of them this spring, but not a single peach, nectarine, cherry, apple or pear fruit.  My mom said that they have the same problem.  Not sure if we had a late frost come after the flowers appeared or what.  So that’s a big goose-egg on getting anything from our trees this year.
The raised beds in front of the house are doing fairly well though.  I have three or four types of tomatoes and three types of peppers, four rows of onions, four rows of turnips (which I still need to thin out), some cabbage and eggplant.  Although the eggplant are stunted.  They haven’t grown a lick since I put them out there.  They were started in the peat pots earlier this spring, but I think I left them in there too long and now they just won’t grow.  I had this same problem last year.  You’d think I would have learned, but nope.
So what have I learned?
That I will no longer start squash indoors.  It’s just too easy to get them started directly in the ground.
Same goes for the peas.  The ones I started in pots & transplanted didn’t make it.  The ones I direct sowed into the ground did wonderfully.
That you can’t keep seedlings in the peat pots the entire time they are indoors.  They need to be transplanted into some “real” soil or they will be stunted when I finally get them outside.
I will be more diligent in watering my berries and other perennial plants.  I may even set an alarm on my phone to remind me to do it.  (I really hate watering the garden, even more than weeding)
I will also try not to buy too many plants (unless it’s a really, really good sale) then let them sit on the front porch and then have Paul finally plant them (and rightfully complaining about it) because I didn’t get around to it.
Hope your gardens are doing better than ours!
Posted by Carolyn at 6:44 AM