Yes, I’d like to report a case of neglect.

One of my neighbors has been leaving her children alone for an extended period of time during the day.  I’ve also seen several other non-family members go in and out of the house.  At one point I peeked in on the kids (when the mom was nowhere to be seen) and was horrified to find that she had neglected them to the point that several of them had been broken and eaten.
EATEN? WHAT????
For those of you who haven’t figured it out yet, I’m not talking about human kids.  My fictitious call was made to the Department of Chicken and Fowl Services.  I’d say that the Chicken Abuse hotline was also fictitious, but knowing the FDA (or USDA or whatever Alphabet bureau), there may actually be such a department.  Anyhow.
The Barred Rock hen that had gone broody a week or so ago was obviously only half-heartedly into raising a family.  I had put a total of thirteen eggs under her and she (or her evil coop-mates) had managed to break, crack and eat a total of six of them.  The others were covered in dried up egg yolk from their recently deceased egg-mates.  She sat on the eggs for the first four or five days, but after that I noticed that she had been leaving the nest box more and more frequently.  Not sure if the other birds were pushing her out of the nest box (because you know, even though there are twelve nest boxes, THAT particular one is the BEST) or she just need to get out of the house and do some dirt-scratching or other chicken-doings.  I was even bringing her food and water so she wouldn’t have to leave the box, but apparently that wasn’t enough to keep her there. 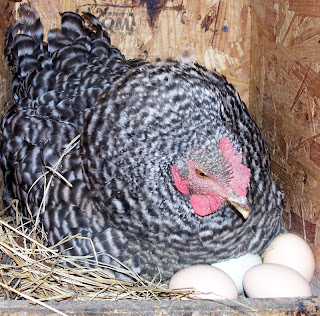 My Not-So-Much Broody Hen before going out on the town.
The one broody Silkie hen that I have is still raising her single chick.  One stinking chick; and it’s another Silkie at that.  I tried putting the standard sized eggs under her but she kept moving off them.  And it wasn’t like I could put more than three underneath her.  So I let her set on several of her own eggs and only managed to hatch out one.  The other Silkie hen doesn’t even lay more than two eggs a week and has shown no sign of going broody.  I had thought that getting Silkies would solve my incubating / brooding problem, but I guess not.
I also found the carcass of our only Rhode Island Red being gnawed on by the dogs a few days ago.  I’m pretty sure that they weren’t the cause of the hen’s demise, but just happened to find what was left of her and decided that it would make a nice snack.
So I suppose I’m back to having to stick eggs in the incubator if I want to replenish our laying hens this year.  If I start collecting eggs now, any hens that manage to hatch & survive should start laying this winter.  Kind’a weird thinking about winter when it’s 90 degrees outside.
Posted by Carolyn at 5:55 PM