It was an insect-filled morning...... 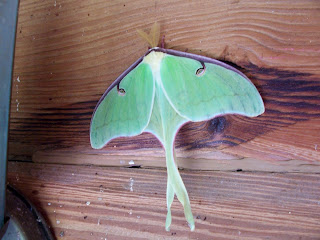 There was a Luna moth by the front door.


And I found a teeny-tiny praying mantis on the grill (which I carefully relocated to the safety of my pea trellis before turning on the burners).  I tried to get a picture of her, but she was just so tiny that the camera wouldn’t focus properly.
And then, my nemesis, the Bald Faced Hornet! 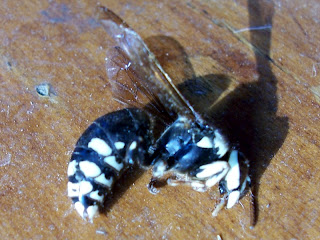 Which was no match against me and my cat-like reflexes.  Actually, it was more like me cussing, jumping up and down, pivoting and dodging while flailing the swatter around in all directions.
I was hoping that this was a queen since it was so much larger than the other ones I’ve been seeing, but knowing my luck, it probably wasn’t.
Last year I was at war with the bald-faced-buggers.  Every time I went into the barn to milk, they would be there, relentlessly dive-bombing my head.  I’m assuming they frequented the barn not only to torment me, but to take advantage of the flies buzzing around the barn.  It was actually kind of interesting to see them hunting flies midair….although not interesting enough for me to stop trying to crush their exoskeleton and splatter their guts any chance I got.  At one point mid-summer, I would have to milk the goats one-handed as I had to keep a swatter in the other hand.
After killing dozens of them, I decided that I had to tackle the problem at the source.  And that meant trompsing through the tick and chigger infested tangle of wood to find the nest.  But I didn’t find it, and before the winter and the insect-killing frosts came to the woods, I received no fewer than five stings.
When Paul was dozing down some of the Evil, I mean, Enchanted Forest earlier this spring I noticed something hanging in the trees just where he had stopped.  And guess what it was? 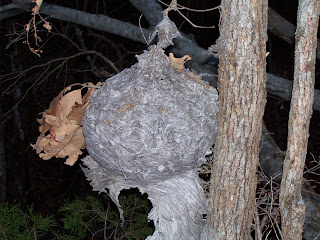 The nest!  It was a bitter sweet find though.  As much as I was happy to have finally found the nest, it was empty as the workers die in the winter and the queen (that bitch) finds a comfy little pile of leaves or dirt to hide in and hibernate until the following spring
I’ve only been visited by two, maybe three bald faced hornets so far this year, but I’m sure as the summer months drag on their numbers will increase.  Hopefully I’ll be able to find the nest before I receive too many stings this year.
Posted by Carolyn at 12:41 PM