Here are the stats for this go-round of incubating:

Of the five fertile, but unhatched eggs, four of them had what looked like to be fully developed chicks inside, but each had some sort of deformity.  I know it sounds gross, but I do crack them open to do my own necropsy.  I'm weird like that I guess.  So if you don't want to read anything "gross", skip down to the next paragraph..............last warning..........One had a deformed neck, one was positioned almost upside down and twisted looking with an exposed spine, one had not developed a skull and the top of it's brain was exposed and the other one I had no idea what happened.  Bummer.

There was also a twenty-first live hatch, but I had to put it down.  We occasionally have a chick that hatches out with "splayed leg" (I think that's what it's called).  One of their legs kinda sticks out and they can't stand up correctly.  We've actually successfully rehabilitated three chicks with this condition by attaching a string hobble to it's legs.  The strong leg helps pull the weaker leg up and it can then walk, albeit a bit funny.  After about a week, the chick can walk pretty much normally and the hobble comes off.  After they grew up, I could never tell which chicks had the hobble on, so I guess that's good.  Well, this chick had leg problems, but it was too severe for a simple hobble; I think it's joints were seriously misaligned so after two days of watching it dragging it's body along the floor of the brooder, I put it out of it's misery.

Yesterday morning I also went to pick up my order of Cornish Cross chicks at the farm store.  We got twenty-five straight run chicks and they, along with our farm hatched layer mutts, are happily peeping in the barn.  Of course, it was a hundred degrees again the past few days, but I've been keeping a close eye on them so they don't cook.  So far, so good.  And if it does get over a hundred degrees, I'll plunk them into a big rubbermaid tub and bring them in the house.  I'm NOT going to lose forty-five chicks this time! 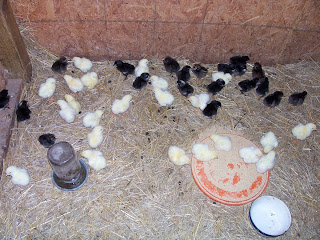 They are only a few days old, but already the Cornish are
staking their claim to choice seats at the feed table!
For the past five years, we've been raising Cornish Crosses.  Four out of the five years we've ordered a batch of fifty, but this year I only got twenty-five.  It's not like we couldn't eat the other birds, but I'm going to really try to keep incubating our own barnyard mutts and put the roosters in the freezer.  They won't grow as quickly, nor get as large as the Cornish, but they will run with the rest of the flock and I can have chicken dinner whenever I go outside and catch one.

Our usual way of raising the Cornish Crosses is to keep them in the barn until they are big enough to go into the chicken tractor and not slip through the chicken wire that surrounds it.  When the tractor gets too crowded, they'll go into the chain link dog kennel, which we can also move to greener grass, albeit not as easily as the tractor.  They live the remainder of their days in the dog kennel.

This year may be a little different.  I actually planned ahead (oh, the horror!) and incubated our chicks to hatch the same time as our order of Cornish Crosses would come in.  So they are all together now and will stay together unless the Cornish hog the food trays too much and the layers don't get their share.  Not sure how long that will take, but I guess we'll find out.

I've also been thinking about going from the chicken tractor to just letting the juvenile birds roam around the confines of the goat pen.  It won't be as secure as the dog kennel, and I'd have to move them into the kennel at night because of predators, but hopefully they will take advantage of their freedom and eat more bugs, move around more and just, well, be more chicken-y.

BTW, Rachel at Dog Island Farm just had a post on Cornish Crosses yesterday, go check it out for more insights & make sure to read all the comments.  Lots of stuff to learn from your fellow bloggers!
Posted by Carolyn at 1:13 PM