We finally got rain.  A full three hours of it and it looks like we’re only half out of the system!  I wonder if it will do my Fall garden plantings any good.  Some of the peas I planted in the middle of August were scorched from the 100+ degree temps but I’m hoping that they’ll pull through and continue growing long enough to produce some sort of pea harvest. 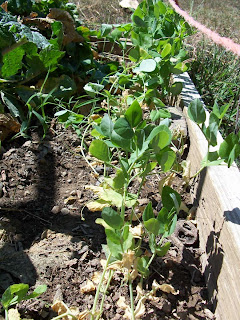 My sun-baked peas.
The lettuce & spinach never sprouted, I’m guessing because of the heat.  My bush beans are being gnawed to sticks one (or three or four) at a time from that frekking rabbit.  The bush beans I planted the first week of July are finally starting to produce some beans, except they are tough and stringy!!  Probably because of – yep – the horribly hot summer.  I gathered a handful of them just yesterday for a snack and I chewed them until I couldn’t stand it anymore & did a “pfffftttttthhhhh” thing, sending a spray of chewed up green beans across the goat yard.  The chickens obviously didn’t think they were too tough.
The spring planted zucchini have been pulled up for a while now, but the fall planting seems to be doing well.   Spring planted cucumbers are done & gone.  The fall cucumbers aren’t doing great though; still pretty small and not much growth in the past few weeks.  Wonder if it’s been too cool for them lately.
We did plant some more tomatoes later in the season (75% off at the local nursery, how could I NOT buy them??), and there are actually little green tomatoes on them!  So we may actually get some ‘maters this year.  Not enough to can, but enough for a few BLT’s.
Now if we can just get a hog in the freezer so we can actually put some bacon in those BLT’s.
Posted by Carolyn at 4:31 PM