Erica over at Northwest Edible Life is doing another No Spend Month and I thought I'd join in on the Fall Frugality Fest.

We did a "no spend" month last August and it went pretty well.  It's not like I'm a Starbuck's junkie or go to the mall three times a week just to blow the non-existent wad of cash in my purse, but I think it's always a good idea to take a break from - let's face it - unwarranted and unneeded spending. 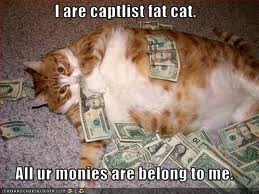 Paul insists that I go out into town too much.  And really, he's right.  There are times that I just feel like I want to get off the homestead, and those jaunts usually end up costing money.  Not just the fuel used in getting to / from town, but since I'm out I may as well stop and get myself a carcinogenic half gallon cup of Diet Pepsi.  Or if Rhiannon is with me, she's been such a good little girl I'll just zip in the drive through at McDonald's and get her a small fry (yes, my daughter and I LOVE McDonald's french fries, damn them to hell).

Then there's the Goodwill and Salvation Army.  Don't get me wrong, I've saved tons of money by getting stuff there, but I may have gone a bit overboard this summer on Rhiannon's clothing.  It's SO hard to pass up a cuter-than-a-button (what the hell is so cute about a button anyhow??) outfit or pair of jeans for fifty cents.  But those quarters and dollars add up.

So without further ado, I'd like to jump in on No Spend October (N.S.O.) and invite you to do the same.  Or not.  Or kind'a join in.  Like instead of vowing to not spend any money at all, just try to limit your "wants".  And every time you refrain from spending money where you normally would have this month, put what you think it would have cost you into a jar or envelope each time and and the end of the month see how much you've saved.

Technically, we're still going to spend money this month.  I really, really do wish that we could do a literal NO spend month.  But as there is the electric bill to pay (I'm not ready to do without electricity for an entire month.......although that may be an interesting challenge), fuel to put in the vehicle for Paul to get to / from work, health insurance premiums and animals to feed, those necessary items will be exempt from N.S.O..