Rain? Only once in a Blue Moon apparently.

Ok, let me start this post with an admission and an apology.

Now here is what it was for.

I am being ungrateful - that's the admission.  I know I should be grateful for whatever rainfall we receive in light of our recent droughts (yes, that's a plural).  I should be outside thanking the Lord, the heathen gods, the Morlocks for whatever amount of rainfall comes our way.  But I was hoping for creek-bank bursting, dam filling, ground soaking, aquifer filling deluge.  And that didn't happen.

I feel slighted, screwed, jipped, and even a bit bitter (did you know I was a bitter person??)  An entire stinking hurricane comes straight through our state and all we get is an inch of moisture?!  And I'm sure there are other drought-stricken areas that were praying for rain and got zip out of this.  Tropical Depression?  More like Tropical Depressing.  I blame my heightened and probably over-zealous expectations of sky-moisture on the weatherman.  If there wasn't such a hype about the coming rain, I would have normally been ecstatic about the current weather conditions.

But I do feel a bit guilty for my current inability to be thankful. We have actually had a nice light rainfall on and off since late last night.  As I look out the window right now, the rain has stopped.  Again.  But after all the dire warnings of "Flash Floods" and "3-plus inches" of rainfall expected, I was left, well, longing.

And I'm sorry - there's the apology - for those that were adversely affected by Isaac's moisture and wind output.*  I joke about loving hurricane season as it usually means rain for us, but I can't even imagine having to go through a real (as opposed to fake?) hurricane.

I hope that Isaac doesn't putter out before giving some more of the drought stricken areas some relief.   My laptop has had the regional radar constantly streaming and I am checking it like every thirty minutes as if my diligent surveillance of the green, orange and red blobs of color transposed over a map of the Midwest can somehow change the outcome of weather patterns.  And to think I used to make fun of those "older" people who always had the Weather Channel on their televisions.

In the mean time, enjoy the rain if you're getting any and go out tonight and see the last Blue Moon until the summer of 2015! 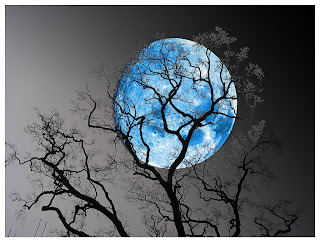 * I do not, however, care one lick if Rachel from Cardmember Services had her house washed away in the flood.  STOP CALLING ME!
Posted by Carolyn at 12:36 PM