Let's start at the beginning, shall we?

You can start this green bean recipe in the morning.  Not that it takes all day, but the second most important part of the recipe is what you have left over after making yourself breakfast.  Breakfast that includes a heaping plate of this:
But don't fret.  You won't have to save the actual bacon until supper.  Go ahead, eat the entire plate.  But what you must not do is throw the bacon grease away.  I don't know about you, but I save bacon grease in canning jars in the fridge for cooking with.  Can you believe that people actually throw that golden goodness away?  I almost cried when my sister said she drains the bacon grease into the garbage.

Anyhow, let the grease cool down a bit, then transfer it into an empty and clean tin can or a mason jar.  Stick it in the fridge for later.

When supper time comes around you'll need to chop up a medium sized onion.  Put the chopped onion into a frying pan with about a third cup of the bacon drippings and turn the heat on to medium.  Open two cans of green beans and drain them, then dump the beans into the pan with the onions and grease.

Depending on how high your heat is and how often you want to stir the contents around, you'll want to cook the green beans until they just start shriveling up and browning on a side or two. 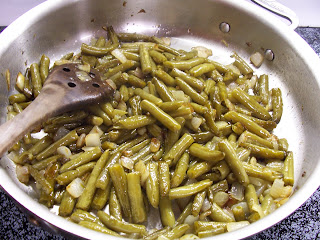 I usually leave the heat on medium and then give the pan a stir every five minutes while I'm working on getting the rest of the meal ready.  About half-way through cooking, I add a crank or three of freshly ground pepper, some chopped garlic and some salt (or just a few shakes of prepared garlic salt) and stir it around.

I really like this side dish with pork.  Or chicken.  Or meatloaf.  Heck, I'd eat the stuff as the main course.

And there is rarely any occasion when there are leftovers which makes clean-up easy.
Posted by Carolyn at 6:46 AM