(How many internet search hits do you think I'll get with that blog post title??)

I love the look of a horned goat, but I do not care to keep any on our farm for purely selfish reasons.  As I don't want to have to get poked in the eye by one, butted in the backside, or have to remove the head attached to those horns out of the fence like fifty-three times a day.

Our original goat acquisition consisted of Nettie and Chop Suey, already disbudded as kids by their previous owners.  With the exception of one male freezer goat several years ago, every kid on our farm has their horn buds burned off within a week of birth.  So Krazo Acres has been a hornless-goat operation. 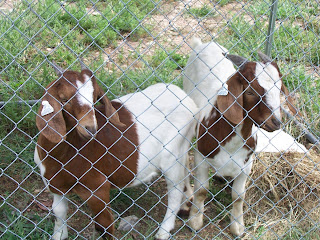 Yes, those are horns you see poking out of their skulls.  But I couldn't help it.  I saw an ad for them yesterday in the trading paper (I have got to stop looking at that darned thing!) and went to pick them up this morning.  The price was right, and I got to see their dam, where they grew up, and who raised them.  But there was still the horn issue.  Obviously I got over it, but not without much deliberation.

You see, getting a Boer goat around here is almost impossible - don't ask me why.  Getting a hornless Boer is impossible.  And horns aside, we can't justify spending $450 - $650 (and up!) for a registered kid.  And although I can appreciate the time and pain in the butt it is to have and keep registered animals, it's just not something we felt was necessary for us here.  Technically, Nettie is a registered purebred Saanen, but don't tell her that because she'll get a complex.  Anyways......

I guess we could have gone to the local sale barns to find one (with horns of course), but I'm always leery of those places.  I'm sure that there are plenty of good animals that go through there for one reason or another, but it just seems that the sale barn is what happens to animals that aren't good enough to be sold outright or that the seller may be trying to hide something like unhealthy herds or deplorable living conditions.

I think I really lucked out with Pickles.  Yes, she's a screaming-mimi right now, and a little annoying as she's a bottle baby, but it seems like adopting an orphan at a few days old was the only way I was going to be able to have a hornless Boer goat.

So back to why I now have two horned goats on our place.

Pickles is going to need to be bred next year.  For two years straight, I had been putting ads out looking for a Boer goat for stud with no luck (I was going to breed Ishtar to a Boer).  When it comes time to start thinking about having Pickles bred, I don't want to have to go around begging & pleading for somebody to let me rent out their male Boer - assuming there was anyone I could even find to listen to my begging and pleading.

We now have a Boer buck and a second Boer doe to start our meat goat herd.  I can now have Pickles bred, right here on the farm.  Except that I still need to find another Boer.  What, you say?!  You now have a Boer buck, why do you need a second one?  Well, because the new goats are brother and sister.  There is such thing as "Line Breeding", which is technically a nice word for inbreeding, usually between father and daughter or granddaughter, but usually not between brother & sister.  In/Linebreeding isn't necessarily a bad thing, but one doesn't really want to do in indiscriminately (i.e. oops....didn't separate the male kids from the female kids soon enough and brother bred sister) but to breed for desired traits.

So although Pickles has her buck, I still have to find someone with a Boer buck for the new doeling.  But I will not, repeat, will not, be keeping another buck.  I'll just have to scour the countryside for a stud for rent.  If worse comes to worse, I'll be at the sale barn to buy a buck, use him, then immediately sell him.  If I can't find or or buy another buck, I can have him breed his sister, and hope that no funky / bad / lethal genes come out in the offspring.  Which would not only be a bummer, but a waste of an entire breeding year.

This still does not remedy my horned goat situation.  At least not immediately.  My theory is that the kids from Pickles and the new doeling will be disbudded and depending on how those kids turn out, decide if the two horned goats will stay or go.  And if they do leave the farm, I'll have to do this all again.  Ugh.

My head hurts just thinking about it.
Posted by Carolyn at 3:49 PM