Outside Kitty made a break for it sometime yesterday afternoon.  One of the goats (Nettie, I suspect) managed to push in the wire to the kidding pen door where I had him trapped against his will safely contained and the cat obviously saw it's chance at freedom and left. 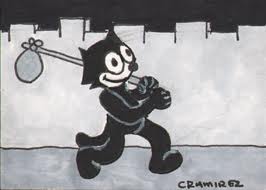 Nettie is beginning to be such a bugger.  She manages to open the back shed doors (latched, btw) and the chicken coop doors just because she can.  And she's also pushed in the wire on the little kidding pen so the chickens that go in there at night can get out before I open them up in the morning and end up pooping all over the barn floor.  I really need to get wooden slats up instead of just using the wire mesh.

Anyways....I went out last night to close up the chickens and do my crazy-cat-lady "meow-meow-kitty" to see if Outside Kitty was still hanging around and he didn't meow back nor show himself.  So I put the can of cat food right under the barn.  It was still there this morning.  So I'm a bit bummed about losing Outside Kitty, but I guess it just goes to show that some animals will not tolerate any infringement on their freedoms.  He had a warm, fluffy bed with two warm meals a day and still jumped at the chance to get out of there and out into the freezing wild.  Hopefully he'll come back soon and not harbor nasty feelings towards me.

Speaking of freezing, I've had to break out the big guns this morning:
My official ice chipping & skimming equipment.  It got down to nineteen degrees last night (yeah, yeah, I can see all you Northerners rolling your eyes) so I had a thick layer of ice to whack out of the water buckets.  The kitty litter scoop is for scooping out the floating ice.  For years I used my hands to skim the ice out. Duh.

But on a good note, look at what I found:
Well, Paul was actually the one who found it.  So now who ever is so lucky as to win my Dark & Dreary Days Giveaway will have the complete set of Mother Earth News CD's.  If you haven't already entered, just click on the link and get your name in the hat!
Posted by Carolyn at 9:01 AM