Well, guess we couldn't expect to have NO snow the entire winter: 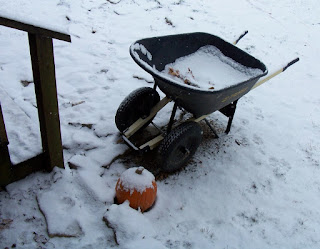 And as luck would have it, I was actually in town when it started.  So I had to drive home in it.  There must have been a quarter inch on the roads!  And my knuckles were white from gripping the steering wheel so tightly.

Now before all you "Oh, it's -10 below here today and we've got 3' of snow on the ground, but that's cool with us" people roll your eyes and give me a huffy "Pffft", let me mention that our "town" doesn't have snow plows.  If we're lucky, the county road grader will come down to plow if the snow get like, say, a foot deep and the road & bridge department has nothing better to do with their five graders and eleven-hundred-something miles of gravel roads to plow.  And you know that salt stuff that highway departments normally put out before and during a snow?  Not so much happening around here.

I only had eight miles to get back home.  I was behind a person (handicap plates, btw, although around here you're more likely to see them than "normal" plates) that was having quite a time staying between the yellow and white lines.  I made sure I was WAY behind him/her because I didn't really want to have to slam on the brakes and end up skidding off the side of the road, rolling down the hill and crushing my skull against a large hickory and a boulder.

So on the way back home I stopped up by Ms. Melman again to top off the water bucket and fork out some more hay just in case I couldn't make it up the insanely steep hill with the vehicles.  Yes.  I've become a Snow-wimp.  But at least I didn't stop at the store for French Toast Fixin's (you know; milk, eggs & white bread).

The goats, who were kind'a nibbling on the n.s.g.h. (not so good hay), now refuse to touch it.  Because you know, it got some snow on it.  I swear I'm going to let them starve before I fork out any more hay for them.
Posted by Carolyn at 3:41 PM