Well, since I totally screwed the pooch and forgot about Mama Pea's Soup Sunday last week, I guess I should share one this week.

This has got to be the easiest, albeit a bit boring, soup to make.  Well, except for maybe opening a can of Campbell's, but I'm thinking we're all looking for the Mmmmmm, Mmmmmm, HOMEMADE good kind'a soup. 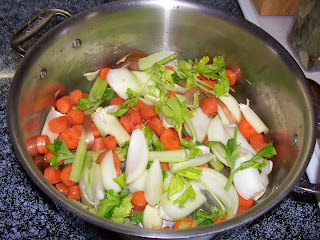 I cut up carrots, onions and celery and put them in a pot with three cloves of crushed garlic.  Added a little glug of olive oil to the pan and sauteed the bunch for about five minutes, until the onions just started to soften.  The I dumped in about 8 cups of water, a teaspoon or two of parsley and a few bay leaves.

Bring the soup up to a boil, then reduce heat and keep on a low simmer for several hours (I think I had mine on the stove for 2 1/2).  Some of the water will evaporate during the cooking time, so make sure to add some back in every once in a while and add salt to taste.

Normally I would keep all those good vegetables in the soup, but this time I wanted to make a simple broth so when I took it off the stove I strained everything through a sieve lined with a few layers of cheesecloth. 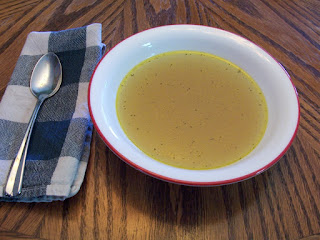 This is also a good way to use up all your vegetable peelings.  Because you DO keep all those peelings in a zippy bag in the freezer until you've got enough to make soup, right?!

That's what I thought.

Oh, and for something totally unrelated, I give to you my first RCP (Random Cat Picture):