I haven't milked Nettie or Annette for three weeks now.  It's actually quite nice not to have to milk when it's freezing outside, but I'm having milk withdrawals.  This happens every year.  But this year I planned (a little) ahead.

I managed to freeze a half dozen smaller bottles and two gallon jugs of milk before I dried the does up, but I've already gone through the smaller bottles.  And I won't have any fresh milk until Annette kids, which is like two months away (actually, 53 days away.....but who's counting?).

I've been letting Rhiannon have the milk if she wants cereal or oatmeal, and I've been using it sparingly in my tea.  I had put an ad in the local paper looking for a source of fresh milk, but nobody has answered.  When I was at the store a few days ago I glanced at the price of milk; $4.65 a gallon!  I'd have no problem paying that for fresh milk, but store milk?  No way!  I'll be using powdered milk for cooking or baking and once our frozen milk is gone, we'll just go without until kidding time.  I would have frozen more, but our freezer space was at a premium and I really couldn't jam much more in there than I already had.

Oh, and speaking of milk cravings, guess who is back to crying for a cup of milk whenever I go out to the barn to feed the goats? 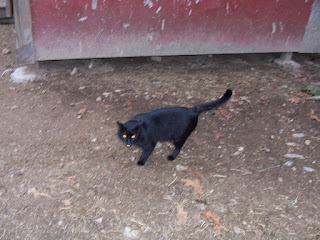 Outside Kitty came back!  He was only "gone" for a day, and he may have actually still been here and was just giving me the cold shoulder (or a furry middle finger).  I even got him to eat in the barn, but he's much more skittish now whenever I move, probably thinking I'm going to lock him up again.  But when I'm away from the barn, he runs right up and meows hoping for a snack.  Which I am of course, obliged to provide.

PS - If you haven't already, click HERE to enter to win some Mother Earth News CD's and a H.B.B.O.C. (Honk'n Big Bar of Chocolate)!  Entries close tonight at midnight!
Posted by Carolyn at 5:22 AM