It was a beautiful day today, 59 degrees according to the little thermometer out on the back deck.  A bit squishy, but almost sixty degrees at the end of January?  I'll take it.

Grandma, Rhiannon and I were enjoying the warm weather as were the goats.  Jumping around like nutjobs, butting heads and all those other goat-goings-on.  Lily and Chop Suey were roughhousing around and Nettie came in to break things up.  But when she got in the middle of it, Lily threw her head back and poked Nettie straight in the eyeball with one of her horns. 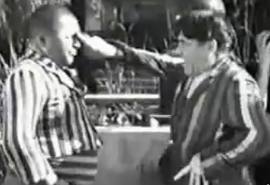 Nettie went reeling back and I tried to get a look at her.  She was keeping the eye squinted shut and I couldn't really get a good look at it.  After about a half-hour I went back to check on her and her eye was open and luckily it didn't look like there was any damage done.

I know that this is a pretty isolated incident, and it's not like Lily meant to poke Nettie in the eye (or at least that's what I keep telling myself), but it does reaffirm my decision to strive for a hornless goat herd.  My plan was to sell Lily after she kidded with at least one doeling and to also sell Herman, her horned brother, after he was used to breed Pickles later this year.  I really do like the looks of horned goats, but I'd like to lessen the chances of any potential horn-inflicted injuries.
Posted by Carolyn at 3:01 PM