Well, we didn't take Rhiannon to the hog butchering this weekend.  And we ended up staying home as well since it was such a beautiful Saturday.  Paul spent several hours on the bulldozer, trying to get the fence line for the new pasture area leveled and free of huge boulders & nearby dead trees. 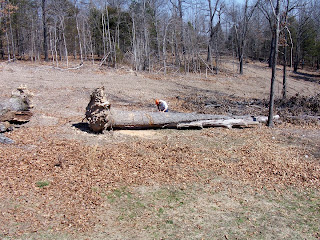 While Paul was busting his hump, Rhiannon and I spent some time introducing and supervising the interactions of the new and current caprine crew.  In other words, we played with the goats all afternoon.

It started raining Saturday night and all the way through until Sunday afternoon.  Although I longed to be outside, the rain is much needed and greatly appreciated.  Since we were stuck inside for half the day, Paul started organizing the chest freezers.  I love the fact that we can store half a hog, dozens of chickens, ground beef, two deer and lots of veggies in the huge freezer, but it does occasionally pose a logistics problem.  As in: "Didn't we have more chicken?", "I could swear we had a brisket in there!" or "I wonder how old these almonds are" and my new favorite, "So that's where those squirrels went!"

When we got the last deer, I had planned on canning everything immediately, but that didn't so much happen.  The roasts and big hunks of meat were just bagged & chucked into the deep freeze.  The meat has just thawed, been cut up into chunks and is ready to be pressure canned today.  I also found about two gallons worth of frozen blueberries from last year.  Some became a impromptu cobbler kind'a thing and the remaining were made into blueberry jam and jelly. 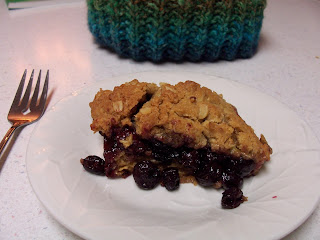 I also had to do the unthinkable and toss several bags of frozen veggies.  One bag had a "Use By" date of 2009 and while I don't mind using "old" food, they were so freezer burned it looked as if they had been dehydrated.  The chickens were pretty happy about my lack of rotating the frozen goods though.  The dogs weren't left out of the freezer-food-festivities they each got frozen squirrel-sickles for lunch.  What a treat!