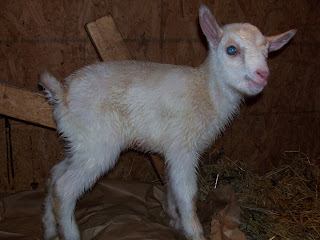 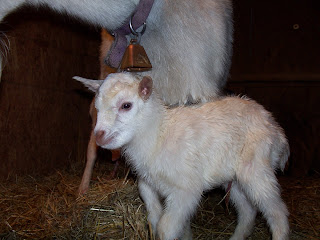 Cleverly named by a friend of mine after two pubs near their cottage in County Claire.

Nettie was yelling all day yesterday and her tail was sticking straight up since the morning so I figured she'd be kidding that day.  Her due date wasn't until Tuesday but I'm glad she kidded early because Paul was home so he and Rhiannon were able to help.  Nettie's labor went smoothly and pretty quick.  It helps knowing your goat and her mood swings and habits because it makes predicting labor and judging how far along she is much easier.  Nettie started labor around 6 pm and I put her into the kidding pen where she immediately laid down.  I went back into the house for about a half hour then came back to the barn and stayed with her for the remaining time.  By now I've got a pretty good routine going; grungy barn clothes on, mug of hot tea, book and two-way radio (to call Paul for a tea warm-up, raisins for Nettie and to let them know when to come out to the barn).  Two hours later the kids were dry, nursing and I was back in the house.

I was really, really hoping for at least one doeling from this kidding as it was Pan's last stint at fatherhood here at Krazo Acres since I traded the bastard for two sacks of corn last fall.  Figures she pops out two bucklings.  I could even tell that they were males before the sac broke because I saw the horn buds.  I usually can't even feel the horn buds from doelings until several days after kidding, but the buds on the males are clearly defined.

So the 2013 kidding season is over with a total of three bucklings.  I've sold the buckling from the new horned goat (who still doesn't have a name, poor gal) but he won't be leaving her for three more weeks.  Annette's buckling is up for sale as are these little St. Patty's day boys.
Posted by Carolyn at 6:50 AM