Slothwoman is on the move

I'm like weeks behind schedule, but I finally got my lazy sloth bum in gear and started some of my seeds! 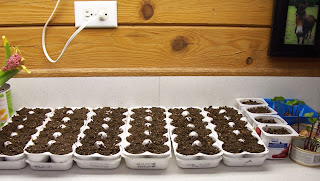 I've got room under my single lonely grow light for five more egg carton (i.e. hillbilly) seed start trays.  I'm going to try very, very hard to not start any cucumbers, summer squash or winter squash.  Two years ago I started squashes indoors and when I put them outside I also direct sowed seeds in the same area.  After about a month & a half you really couldn't tell which one was started early and which one was started right in the ground.  Going to direct sow the peas and beans as well.  I saved a bunch of green & yellow wax bean seeds last fall.  The beans were so tough last year because of the drought that I just let most of them go to seed and dry up on the vines / bushes.

About a week ago I placed an order for four mulberry trees, twelve hazelnut bushes, six blackberry and six raspberry bushes.  There's also a nursery in town that is advertising gala, fuji and honey crisp apple trees for like twelve bucks!  They are ones I've been wanting to get anyhow so I'm planning on getting two of each of them.  Speaking of trees, I never finished pruning the pear trees.  Wonder if it's too late to do that.  Paul also mentioned looking up taking a cutting from the pear trees and trying to get it to root.  I bought some rooting compound last year (where it is, however, is anyone's guess) so figured I'll give it a go.  Have any of you rooted fruit trees using cuttings before?  I'd really like to try it.  It's like free trees!!

Paul's Take
So I guess that means that I'll be the one digging holes for all these new bushes and trees.