Who says I'm an old-fashioned wife?

I went into town this afternoon and picked up a case of beer and a few hot chicks for my husband: 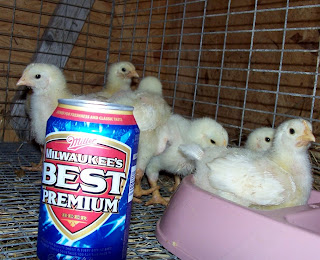 Our local feed store had "Chicks are Here!" up on their marquee for over two weeks now.  Goodness knows we don't need any more layers (I think we've got thirty hens right now) and it seems as we just finished butchering the last batch of creepy meats.  But this afternoon I went to the feed store to get some chicken and goat food (imagine that, thirty-plus chickens and nine goats) and I asked to see what chicks they had left.  You know, because Rhiannon loves seeing the baby chicks.

There were about a dozen layer pullets, almost two hundred RIR & Buff cockerels and seven plump lonely little two & a half week old Cornish Crosses.  So the nice man put the bunch of cornish birds in a box for me Rhiannon.  He also wanted to know if we wanted a "great deal" on the remaining cockerels, but I had to say no.  Believe me, I though about it, but the fact that we don't have any room in the barn made it pretty hard for me to come up with an excuse to Paul as to why I had two hundred male egg-layer breed birds in the car.

The weather has been really warm the past few days and today was in the mid to upper 70's so the chicks were actually panting when I opened the box once we got home.  They aren't quite big enough to have to forgo the heat lamp when it gets into the 40's at night, so I'll have to hook that up.

I've been actually thinking about doing our future meat bird purchases like this.  Meaning waiting until the birds were older and then buying them.  I figured I just saved myself two & a half weeks of feeding and watering the chicks!  I know that we may not always get as many as we want, or even any at all if the feed store sells out quickly, but we could still order from a hatchery if there were none available.

Paul had mentioned wanting some "game hen" sized birds this time, so we actually won't be having to care for these guys for more than a month before it's time to butcher them.  I go back & forth about just growing the creepy meats to game hen size because in my mind, it's just less chicken dinner for us.  But I really do love the sight of an entire roasted mini-chicken on everyone's plate.  Pictures to follow in about four weeks!

Paul's Take
No.  No I will not pose for a picture of me drinking beer with poultry.  And did you have to advertise that you buy me cheap beer?
Posted by Carolyn at 4:34 PM