Three more squirrels were put into the freezer (yes, I have greatly improved my shot).  I was going to cook them up right away, but we had other meat that needed to be taken care of.

A beef brisket (from like Winter of 2011) was taken out of the deep freezer to defrost, then cut in half.  One half was smoked and pulled apart to be slathered in homemade BBQ sauce in the near future, and the other half is currently sitting in a tub full of brine in anticipation of becoming a slab of pastrami.

A Christmas goose was cooked and eaten.

And by far the best meat-event was the making of summer sausage: 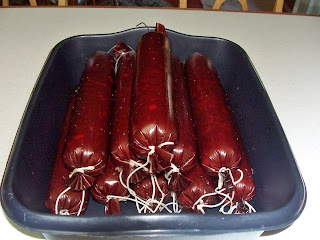 A few weeks ago we attempted to make a small batch of venison summer sausage, but it didn't turn out well.  The meat wasn't ground fine enough and there weren't enough spices.  The fact that we cooked it in the oven at too high a temperature didn't help and we didn't get any smokey flavor either, thus making our sausages "blah". Luckily it wasn't a large batch as it will probably end up being snacks for the Big Sloppy Dog.  Our recent batch, however, was darned yummy.

We used ten pounds of ground venison, one pound of fatty pork, LEM Summer Sausage seasoning & cure, and then added some liquid smoke, extra garlic salt, four jalapeno peppers and 8 ounces of monterey jack cheese.  There was a little bit of sausage left after we ran out of the casings so Paul just rolled it up in a small tin-foil log.  He loaded up the smoker with hickory and plum and smoked the sausages for three hours at 150 degrees.

After the sausages were taken out of the smoker they were put into a cooler filled with ice in order to stop the cooking process as well as to firm things up.  I put the small tin-foil sausage into the freezer to speed things up because we were very anxious to do a taste test.
The little sausage was deeee-licious!  And we had to sample the larger sausages later on, because, well, to make sure everything was ok.  Wouldn't want to have inferior sausages just laying around the house you know.

The cost of the LEM seasoning package ($10) and sausage casings ($8), although not very expensive, make me want to mix our own seasoning / curing mix and see if there is an alternative to the store-bought collagen casings.  The tin foil wrapping kept the sausage in a nice shape, but I think it prevented most of the smokey flavoring from penetrating into the meat.  Maybe I'll do a side-by-side test next time.

Which may not be too far off the way we're chowing down on them.

Mmmmmmmmm.
Posted by Carolyn at 7:05 PM