Several weeks ago I put out an ad for Olivia, the doeling that I sold last year, but got back a little over a month ago.  She's a sweetie, but I really didn't want any milking Nigerians.  Technically she's 3/4 Nigerian & 1/4 Saanen, but I'm not really into the smaller milk goats.

Anyways.  I had several inquiries about her, but the serious ones apparently weren't serious enough for them to drive to our place nor even meet half-way to procure her.  I only wanted $150 for her so there was no way I was going to spend $40 in diesel fuel to sell her.  Then a lady about 2 1/2 hours hours from here inquired about her.  She wanted a smaller milking doe and liked the idea that she had some of the Saanen milking lines in her.  And she was willing to meet half-way.  Which I still wasn't thrilled about, until we started discussing the details.

She was more than willing to pay my asking price, but then threw out the idea that she had a year & a half old Boer doeling that was more than likely pregnant and sent me a picture of her taken earlier in the Spring.  And for that I was willing to make the two hour round trip drive for.  The fact that I was able to use my Mother In Law's car to haul Olivia and the new goat back & forth in was even better.  (Don't worry Grandma V., not a single turd or sprinkle of pee soiled your beloved Cruiser.)

So we agreed on a meeting place and time, I packed up the kiddo and goat and we were on our way for the Goat Swap.

The trip there was uneventful (and un-pee-ful, thank goodness) and quiet.  I had half expected to be cramming chewing gum, used napkins or whatever other sound-blocking material I could find in the car to shove in our ear canals if Olivia started yelling.  She didn't utter a peep.  And swapping out goats wasn't nearly as difficult as I thought it would be, although I did get a few strange glances as I walked Olivia around the grassy area between the McDonald's drive-through and the Walmart parking lot for a potty break.  What?  You don't take your goat with you when you go shopping?  Sheesh.

Penny (the new goat) was a little larger than Olivia, but still had enough room to turn around (and around, and around, and around....the entire trip home) and lie down.  She wasn't nearly as well potty trained as Olivia and I had to stop three times when I noticed her squatting to pee.  But I had crammed a bunch of old towels, wee-wee pads and paper towels in the back so it was just a matter of wadding up the wet ones, putting them in a garbage bag, and tying it up until we got home.  Penny was also a bit more vocal than Olivia, but nothing horrible or ear-splitting.  I can't even imagine how horrible it would be to have had Pickles in the car with us for a two-hour drive.

We got home safe & sound, unloaded Penny into her temporary pen and cleaned out the car.  No one would have ever guessed that I had just transported livestock 120 miles in the Cruiser.  I did, however, sprinkle a bit of carpet deodorizer and vacuumed up just in case there was any goaty smell.  Now there's just the overpowering smell of  fake flowers in there.

I finally move Penny in with the rest of the goats after four days and of course there's some head butting, pushing and shoving, but I think the 8" of snow in the yard has decreased their desire for bullying the new goat on the block. 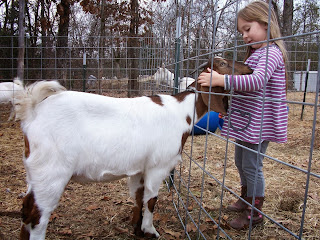 Penny is such a love bug and follows Rhiannon and I everywhere.  But as much as I love her demeanor and really, really long floppy ears (Too long?  Hmmmmm?) and uncharacteristic spots here & there (Double-Hmmmm??), I'm thinking that she's not all she was "supposed" to be.  But more on that later.  She's a sweetie and I'm keeping her.

So, just in the past two months I've swapped two goats; NewNew's little doeling for a two-year, as-needed rental of Merv the Perv for stud service and Olivia for the newest addition to our Boer herd. And I'm going to put an ad out for NewNew sometime this week.

Wonder what I'll end up with next?

Paul's Take
How about ending up with some CASH?  When she said she was going to get rid of some of the goats, I figured that she meant for money, not more goats.
Posted by Carolyn at 1:16 PM