Since I ain't got nothing else to do

Figured I could crank out a blog post to make up for my skimpy November blog numbers.

We got sleet / rain / ice pellets yesterday morning starting around 9 am.  It finally let up.  When it turned to snow.  There is now at least 7" of snow on top of the car.  Which is probably stuck to the ground for at least a week as the highest temperature in the near future is a balmy 32 degrees.....on Thursday.  And by the looks of the radar, I don't see the snow letting up for at least another three hours.
I suppose I should be counting my blessings though.  The weather didn't provide the exact mix of temperature and moisture to cause much ice to accumulate on the trees, so we've been spared (so far) a power outage.  Hauling warm water to the goats / chicken is a pain in the bee-hind, but the water situation would have been much, much worse if the electricity went out at the mule barn as their water is warmed with a stock tank heater.  And since Paul is on Snow Call he's had to drive into work, and past the mule barn, twice a day so he's been taking care of feeding & watering Ms. Melman and Nugget.  Another thing to be thankful for is the Dodge dually.  The county hasn't made it's way down our road with the plow or grader yet, and I don't suspect it will for a few more days.  If it weren't for the dually, we would be stuck at home.  Which I don't so much mind, but Paul's work wouldn't be very happy.

The wood stove is eating up the logs, and we're still in the 20's outside.  It's supposed to get down to Zero tonight so I'm going to be through the logs on the front porch before long and have to dig into the pallet of logs I brought up on Wednesday.

I've been shoveling the snow.  Not for us, mind you.  But for the goats and chickens.  Because you know, snow is evil.  Goats hate ANY type of moisture coming from the sky.  And the chickens refuse to walk through the snow to even get to their water & food hut.  So what does a farmgal do?  She shovels a path for the chickens, of course! 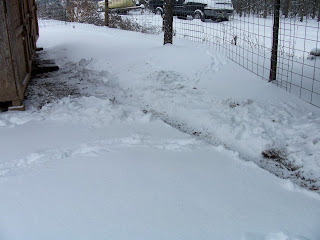 The new hillbilly goat hay shelter thingy is working, although I should probably move the snow off of it before it collapses.  The hoop houses for the stored hay rounds are straining under the weight of the snow & ice.  I had to duck to get under them to pitch hay when I normally can stand straight up.

Well, I'm off to check on the critters.  Again, again.  Then I think I'll come in, have some hot tea & watch Teenage Mutant Ninja Turtles with Rhiannon.
Posted by Carolyn at 12:54 PM