Pew-Pew's demise had been in the plans for several months now.  His aggressive behavior towards us and the other livestock was really pissing me off.  And the fact that Rhiannon would actually cry when she was anywhere near him pretty much sealed the deal. 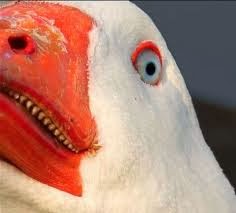 Up until about a month ago, he had the run of the place.  Then I finally put him in the goat pen because Rhiannon refused to go out in the front yard to play.  Two weeks ago, I put him in a separate pen in order to fatten him up.  He got unlimited cracked corn and high protein chicken crumbles, but he didn't eat nearly as much as I would have thought.  I'm not sure why.  Maybe he was too busy hissing at me every time I went by the pen or maybe he stayed up late every night trying to plan his revenge.

Warning:  Mom, stop reading right here.  Really.  Click HERE to look at some cute kitty pictures.  And if you do continue reading, I don't want to hear one peep out of you about it.

D-day was today.  Paul set up the scalding pot and I went inside to clean up the kitchen counter and gather the necessary butchering utensils.  When I went back out to check on Paul, Pew-Pew was already limp & lifeless, hanging upside down from some bailing twine strung between two cedars.  I was a bit surprised to see he had already done the deed and before I could even speak, Paul says, "Well, that didn't go well."  Apparently one cannot "wring" the neck of a goose like one would a chicken.  I believe the end came when the goose's skull met with a short length of fence pipe.  Not something Paul seemed particularly proud of and not something we would replicate if we had any other geese to butcher.  I asked him why he didn't just hang him upside down and slit his throat like the chickens, but he said that there would be just too much flapping around without a killing cone.  And I had to agree.  If you've ever butchered a chicken without using a cone, they can flap around like crazy.  Not only is it messy, but they tend to flap so hard they dislocate their wings and it doesn't make for a nice looking carcass.  I can't imagine the trauma and mess that could have occurred had the goose been left to flap himself to death while hanging upside down and spewing blood from his carotid artery.

Anyways.  We scalded him in the pot of hot water and started plucking.  Not nearly as easy as plucking a chicken.  Even with some soap in the water, it didn't penetrate all the way to the skin and we had to re-dip him several times to get the breast and wing feathers off.  And the down.  OMG, all the down feathers!  It felt like I was plucking a cotton ball. 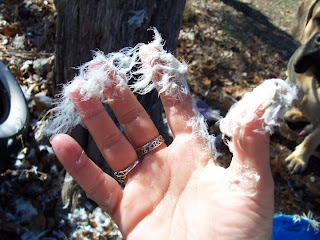 Paul brought him inside and I started cutting exactly like I would a chicken.  And the first thing I noticed was that there wasn't as much fat on him as I expected.  I pulled out the fat in the abdominal cavity and put it away for later.....all 4 ounces of it. :(

The I went on to eviscerating.  I thought it would be easier than a chicken as you can really get your hand up in the chest cavity, but the connective membranes were tougher so I couldn't pull everything out all at once.  I also had to be careful because I wanted to save the liver for pate and I was really looking forward to seeing how big it was.  Which it wasn't.  It was a paltry 2 ounces.  If I hadn't personally just ripped the insides out of that goose, I would have sworn it was the liver of a larg'ish chicken.

After being relieved of his feet, neck and insides (including a pair of testicles, thus confirming he was a he) I put the carcass on the scale.  Six pounds, four ounces.  I think we've had chickens dress out bigger than that.  He was six months old; plenty old to butcher.  Did he not get enough to eat?  Did he not eat more because he was an "only" goose?  Did he purposely avoid getting big and fat as to make himself look less desirable for supper?  I don't know.  But I do know what we'll be having for Christmas supper.  I just hope we don't have any surprise guests because there won't be a lot to go around.
Posted by Carolyn at 3:00 PM