Prego...Is it REALLY in there? 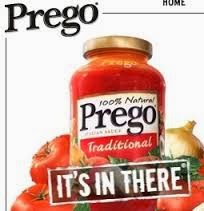 Well, the mass-produced spaghetti sauce may have "it" in there, but I'm not too sure if my goats have kids in there.

Lily is due in eleven days.  Maybe.
She's been looking a bit more rotund lately, but is she really due in less than two weeks?  She was bred twice, so it's either eleven or forty-one days.  She's no where as large as Annette is:
Annette is due one day after Lily's second potential kidding date.  Forty-two days away and would you just look at that bulge?! Annette has always had a hay belly and I've had people ask me if she was pregnant just after she kidded!

Both Pickles and Lily were bred at the same time so the first due date is January 30th and the second is March 1st.  Pickles doesn't even look much larger than normal so I'm betting she took the second time around:
Nettie was also bred two different times, so her kidding dates are either the 24th of February or the 2nd of March.  She's looking like she's got a little bit of a baby bump going, but she's also another hard one to judge.  One year I swear she was so small that I expected only one kid, but she ended up throwing three of them!

MamaGoat is due on on the 21st of March and NewNew is due on the 26th of March:
And then there's Penny.  The "Boer" goat (that turned out to be a Boer x Nubian cross) that was "supposed" to be bred anywhere from mid-July to the mid-October.  She doesn't look the slightest bit pregnant.  Well, maybe a little bit.
Hopefully that's because she was bred in October and still has until the middle of March until her kidding.  Would make perfect sense because two other goats are due at that same time and we wouldn't want to have them spaced out or anything.  Since coming here in the beginning of December she hasn't shown any signs of going into heat, hasn't been oogling over Herman and Herman hasn't been going crazy, so I'm hoping that she is, in fact, pregnant.  Especially since I swapped her with one of my pregnant goats.  Well, I suppose there is a chance that my girl wasn't pregnant, but I did hand-breed her and she never went back into heat.  Penny, however, was just left in with a buck for three months and the previous owner just assumed that she was bred.

This is going to be one of the most interesting kidding years yet.
Posted by Carolyn at 8:13 PM