It seems as if I'm constantly racing against plant, insect or animal in order to get some of the bounty from the garden into our maws, plates or jars.  This year is no exception.

Unlike our pear and nectarine trees which had their fruits wiped out by blight, the peaches did pretty well.  But even though they survived the blight, we still had to deal with another enemy.  Enter the Plum Curculio. 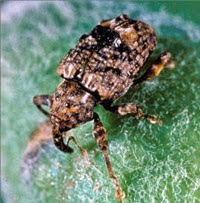 She's a very unassuming little weevil that lays eggs in the flesh of the peach and then it's little baby grub makes itself at home in the flesh and chows down.  I just now learned the name of the bugger and found out it also accounts for the premature falling of the fruit.  Which is exactly what has been happening.  The peaches aren't quite ripe so we have to wait a few days to eat or process them, and also have to cut away at the mess the grub makes inside.  If it's not a particularly hungry little bastard, there's still a lot of unspoiled peach left once you remove him and his trail of fruit destruction so it's not a totally wasted peach, although it's best it you cut it up first instead of just taking a bite as you may end up with a mouth full of grub.  But heck, extra protein, right? 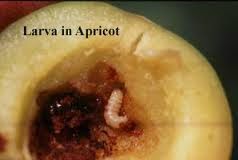 I think we're going to have to seriously consider spraying the peaches with something next year.  The waste that this little pest does probably constitutes at least half of our peach harvest.  And seeing as peaches are the only tree fruits we got this year, it's a significant loss.
Posted by Carolyn at 10:14 AM