Do you have an assassin in your garden?  I do.

No, Paul isn't sitting out in my patch of overgrown tomatoes.  This little snout-sniper is of the insect variety and if you've got him in your yard, you should be grateful: 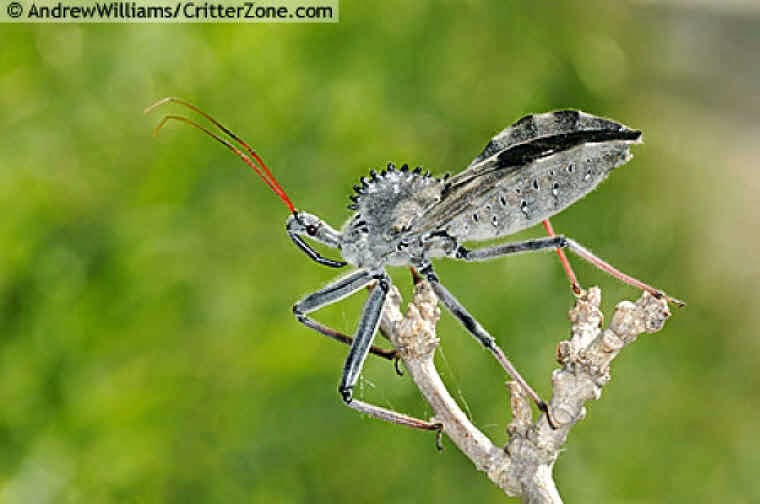 Isn't that one of the freakiest bugs you've ever seen?

(BTW, on an entirely different note, there's a cow somewhere in the local listening area that is very, very unhappy and has been vocalizing it's discontent since 5:20 this morning.  Just thought I'd let ya all know.)

The Wheel Bug is one of several types of "Assassin Bugs", so-called for their knack of ambushing and killing of other bugs with it's long, pointy, scary-looking, stab-you-through-the-exoskeleton mouthpart.  They spear their prey by thrusting out their rostrum (the sharp, pointy, scary-looking thing) and pierce the bodies of their lunch, usually caterpillars, beetle larva/adults, and other soft bodied insects that you'd rather not have munching on your garden plants.  After injecting a concoction of tissue melting spit into it's victim, the wheel bug sucks it all back up through the rostrum, tips the waitress, and moves on to find another meal.
The ferociousness of this bug doesn't stop with it's prey either.  The nymphs are know to be cannibalistic (Oh, howdy there brother!  Just hatched and I'm starving.  Don't mind if I eat you, do ya?) and the females aren't beyond stabbing you through the exoskeleton and sucking out your insides after you take her out on a date.  Scientists haven't been able to determine if the females who eat their mates are just generally ill-tempered or the guy took her out to a cheap Chinese (beetle) restaurant and didn't even bother to pick up the check.

Think that's as gross as it gets?  If only.

When a wheel bug is threatened, and it doesn't manage to jab you with it's mouth-bayonet, then it will push out two bright orange, stinky scent sacks from it's anus.  I've seen this before.  I almost gagged.  Not from the stench (as I didn't really smell anything), but just the surprise of something so freakish looking doing yet another freakish thing with it's bunghole.

After all this being said, I do have to say that under normal circumstances, the Wheel Bug is pretty non-confrontational.  They can fly, although not very well (as if all that wasn't bad enough, now you have to worry about it flying at you) and I have yet to be attacked / buzzed at / speared by or otherwise molested by one of these bugs, so they are welcome here.

Can you find a place in your heart to let this Garden Assassin live in your back yard?  I hope so :)
Posted by Carolyn at 6:37 AM