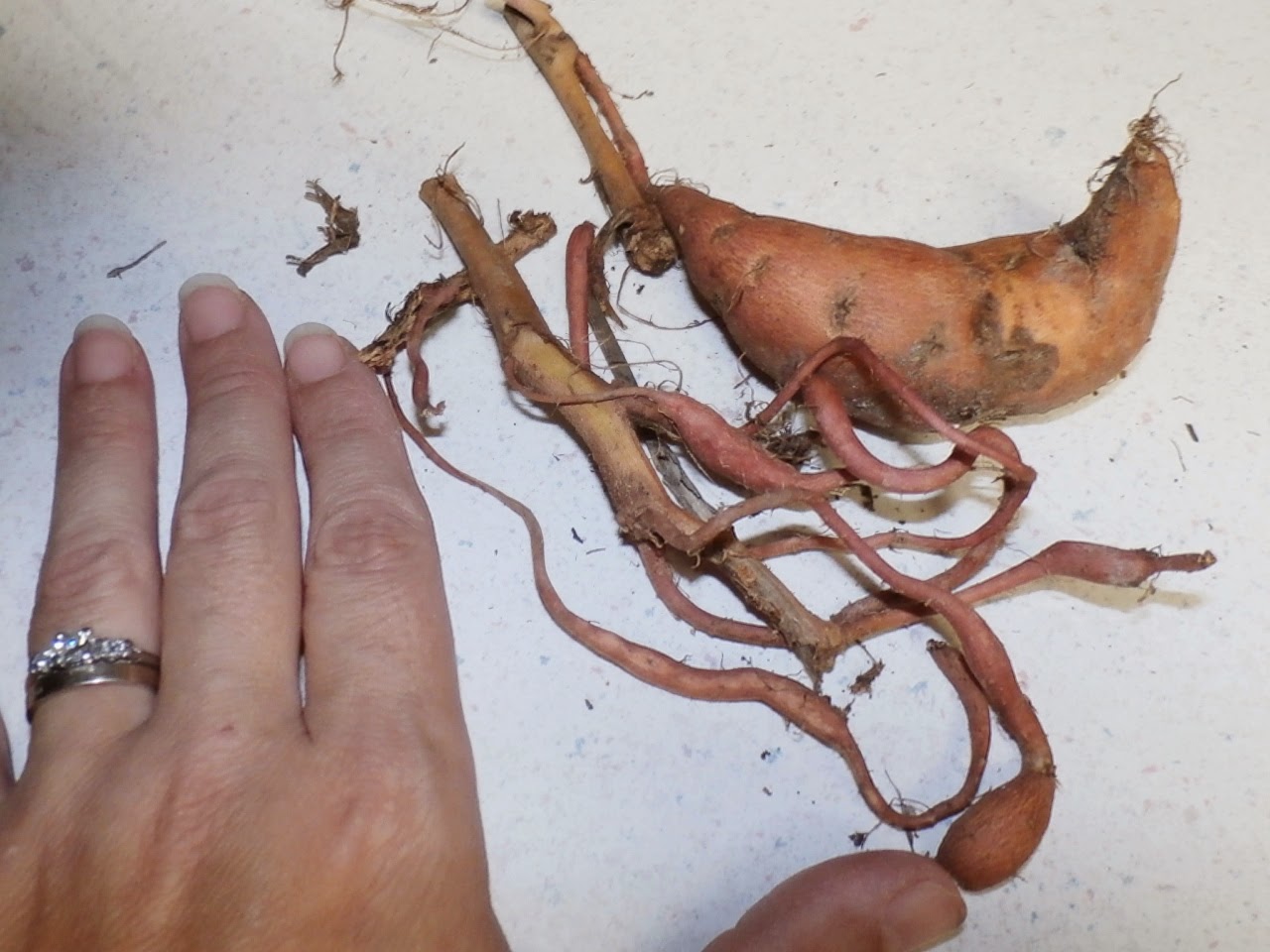 That's my harvest.  Granted it was my first time trying to grow sweet potatoes in the ground, and the deer continually "cropped" the leaves every chance they got.  But seriously?  That's it?!  My "Sweet Potato In A Tub" experiment did better than this.

Oh well.  There's always next time.  At least I hope that the deer got fat on my un-fenced garden munchies as I'm going to be putting a broad head through at least one of them in the very near future.

My teeny-tiny-can't-even-call-it-a-garden this fall was also a bust.  Three quarters of the green beans I planted were torn up by the armadillos and it seems that the curse on my squash continued on past the summer.  Susan was nice enough to send me some globe zucchini seeds and I planted five hills of them for Fall.  There were tons of flowers on them.  There are still tons of flowers on them.  One hill (of three healthy plants) put out one zuke.  One.  And the rest of the hills are about on par.  There is one more decent sized zuke that I'll harvest when it's of adequate stuffing size, and then hope that the four other little baby globe zucchini make it to maturity.

I don't know if it's the soil or the weather or the universe just hates me, but just about any type of melon or squash did jack this year.  One cantaloupe from one plant.  One watermelon from one plant.  Two, maybe three anorexic looking butternut squash from each plant.  And the vines were lush and thick with flowers.  Apparently all male flowers.  It wasn't as if there were dead or rotted fruits after the flowers fell off, just the stems that held the flowers.  Apparently I've got a garden filled with gay vegetables.  Either that or I'm so severely lacking in natural pollinators that I'll be having to hand-pollinate everything from now on.

There are also strawberries missing from my strawberry garden.  Like, the entire bed is void of any strawberry plant.  I noticed the plants sending out runners this summer so I let them go crazy, thinking that I'd harvest them in the fall and move them to another bed to increase my strawberry holdings.  But now there are very few of the travelling plants and none in the original bed.  It almost looks like they were burned or something.  Not having had strawberry plants for more than two years, I have no idea if this is what they "do", if they only last two years, or if the universe in fact does have it in for me.
Posted by Carolyn at 9:05 PM