That's the only way I can describe my goat crew's crazed and insane attitude towards grain.  With the exception of Herman and Studly, every single one of them goes completely and totally batshitcrazy when grain (or chicken feed) is around.

They go nuts around feeding time.  And if I just so happen to be hefting bags of grain from the truck to the barn any other time, they go nuts.  If I go into the pen with a container larger than a coffee mug, they think it's a grain bucket and they go nuts.  If I open the lid on the metal garbage cans that hold the chicken feed (outside of the pen, but within eyesight), they go nuts.  Gawdhelpme if I go into the milk parlor / feed room to get something other than feed during non-feeding time because they go, well, you get the idea by now.

I've been pushed, shoved, climbed on, butted, yelled at and snorted at all over a handful of corn.  I don't know how goat keepers with tons of goats feed grain in a bunk feeder.  There is no way my goats could do that because they would scarf up the feed so quickly and there would be such a battle at the feeder that I fear there would be casualties.....probably me.  And that's why I have to clip each of the effers to the fence for feeding and keep the goat and chicken feed under lock and key. 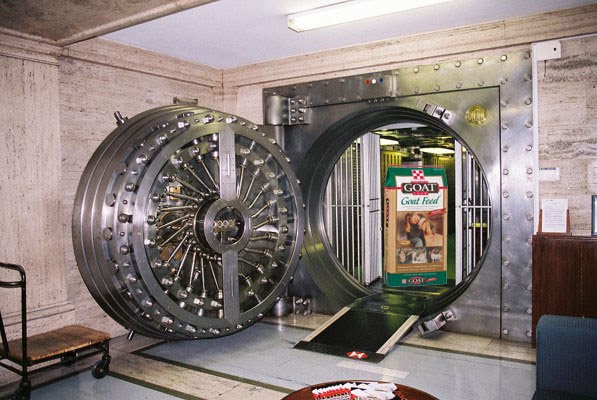 It's not like I'm starving them.  If anything, the non-milkers are getting caprine versions of a muffin top.  And it's not like they always have to guess when they'll be fed.  I feed at approximately the same time every day.  The milkers get fed goat chow morning and evening and the others get fed only in the evening.  They all have pretty much 24/7 access to hay.

But no matter how much I try to keep an eye on them, no matter how many times I think I check my back for a goat, one of them inevitably ends up sneaking or shoving past me to get to the goods.  A few weeks ago they got into the Cornish chick pen.  Luckily none of the chicks were stomped into oblivion.  But yesterday, Penny snuck past me while I was watering the chicks and got into the pen to try and scarf down the crumbles.  She knew damned well she wasn't supposed to be in there, she knew damned well that she was going to get a size 9 boot to her backside and screamed at, but she did it anyways.  The insane drive to snarf down as much chicken feed as she could before being forcefully yanked out of the pen was just too strong for her to resist.

Unfortunately her drive to get to as many feed dishes as possible while dodging my boot and avoiding my grip caused quite the ruckus in the pen.  A goat running around in an enclosed space with a bunch of small, fat, not-very-mobile chickens was a recipe for disaster.  I managed to get her out of there without any actual chicken deaths, but one of them now has a bum leg.  It's not broken (I don't think), but he's not able to walk very well.  Oh, he's still managing to make his way to the feed and water just fine, but I'm wondering if I'll end up butchering him in the next few days.

Paul said he wanted to try a homegrown "Cornish Hen", so he may be getting his wish this week.  If we keep to the "Eight week butchering day" rule, the rest of the Poopy Poultry will be ready for processing two weeks from now.  But unless they really start bulking up, I have a feeling I'll be cleaning out the pen for an additional two weeks.
Posted by Carolyn at 11:54 AM