I've been neglecting a few things around here and the house.  I haven't been replying to comments as much as I used to, and I apologize for that.  I truly appreciate every one of your comments (except for that guy from Dubai who says I have a large sum of money waiting for me if I'd just give him my bank account number), and I will try harder to reply back to them again.

Why the neglect?  Why has the garden gone to pot?  Why haven't I vacuumed under the bed in over six months (who am I kidding, I never vacuum under the bed, Mom usually does).  Why are there a hundred and sixty-two items on the "ToDo" list that still haven't been crossed off?

Well, I do have a small excuse.  Actually, that excuse isn't that small anymore; she weighs in around fifty pounds.  And even though we've been teaching her things for years now, we "officially" started school at the beginning of September (i.e. had to file with the local powers-that-be to make sure they can get their $$ even though we're not sending her to school).  We've been somewhat involved with a local homeschooling group for two years now, but there never seemed to be much that she could join in on.  I taught an art class for a small group earlier this summer and found that I really, really enjoyed doing it.  So I agreed to do another nine week semester this Fall with the larger group.

Whoever thinks that it's easy to homeschool must be insane.  I can't believe how much prep work there was for me (as the teacher) to get a semester of art going.  Granted, this is my first time pretending to be a teacher and I'm sure things will go more smoothly as time goes on, but really, I wouldn't blame a person one bit if they tried homeschooling and ended up putting their kids into a public/private school after finding out how much work was actually involved.

I've been lucky enough to find a homeschooling mentor of sorts.  She has four kids; a seven year old, a five year old, a three year old and an eighteen month squishy baby.  She has already been through a lot of the stuff with her eldest son, and her girl is the same age as Rhiannon so not only do I get to pick her brain on the things she's already done, but we often get together to do subjects like math, science and reading.

And I finally got around to making Rhiannon her own little school area.  Black Susan approves. 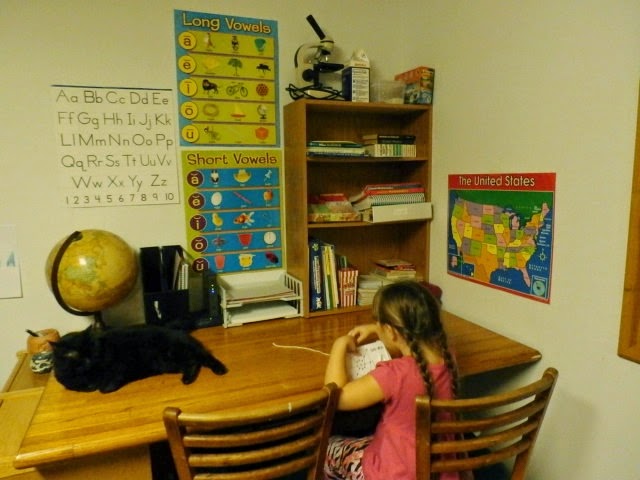 I've also been scouring garage sales for the past few years looking for textbooks and other items we can use in our homeschool adventures.  And would you look at these golden oldie gems I've come up with:
Even though I've been having flashbacks and enjoying playing, I mean teaching Rhiannon, with these "old time" educational products, we do not totally shun modern technology. I subscribe to two online programs, get a lot of ideas from the net as well as use youtube often for watching programs or videos that aren't available at the library in their DVD collection.  One day during our Biology lesson, we were focusing on plant parts and since Rhiannon was munching on peanuts, we you-tubed "Harvesting Peanuts" and learned how peanuts were planted, grown and harvested.  Most of our subject matter comes from every day life or what we just so happen to be doing that day (i.e. the Peanuts lesson).

I'm really liking homeschooling and the occasional teaching stint and I hope to be able to continue it as long as possible.  Although once we hit sentence diagramming, I may have to get her a tutor because I totally, thoroughly, absolutely hated those things: