I finally made my way into the garden this afternoon.  It was a cool 70 degree day (relative, MamaPea, it's all relative) and overcast.  Perfect for weeding the horribly overgrown strawberry beds.

I don't know what happened, but my strawberry bed looks like it was doused with napalm.  Almost every plant inside the bed was crispy and dead.  There were, however, survivors that managed to make their way outside of the bed during the year.  I left the travelling berry plants where they were hoping that I'd get to transfer them to another bed thus doubling our strawberry yield.  But it seems that those plants I destined for a new bed are going to be going right back where they were running from.

At some point during my weed-ripping (and tossing them to the very grateful goats), Paul took pity on me and came into the jungle garden to help me out.  Just like last year, I let my lamb's quarters go bonkers and they had taken over a section of the garden.  Paul decided to tackle the 6' tall plants (I refuse to call them weeds, they are too yummy to be called a weed) but before he could do that he had to drag out a tarp that had been sitting in there for, say, the past four months.

While I was bent over (grunting, sweating and probably swearing) trying to yank out the gawdforsaken prickly sida, I swore I heard a low humming sound.  I stopped my weed-ripping and tried to focus on the noise.  Hmmm.  Maybe the distant sound of a helicopter.  I continued weeding and Paul continued yanking on the tarp.  I heard the humming again, and again I stopped to listen.  I asked Paul if he heard that.  And as I stood and looked up, I found out that the humming was actually buzzing.  Paul had pulled the waterproof roof off the entrance to a yellow jacket's nest and there was a gathering cloud of the effers coming out from the ground.  I glanced towards Paul on my sprint out of the garden and he was still standing there, tarp in hand, just staring at the menacing mass of stinging insects like a deer mesmerized by the headlights of a Mack truck.  Fly, you fool! 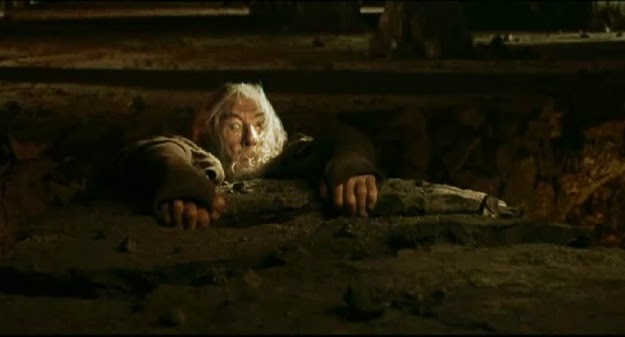 So if you're wondering if I went back in there to finish my weeding, I most certainly did not.  And I'm still trying to convince Paul to go out there tonight and douse the dickens out of the nest with some diesel until every last one of those buggers are dead.

Paul's Take
In response to my wife's recollection of this afternoon's events involving the yellow jackets: An undisclosed amount of fermented malted barley beverages may have slowed my reaction time down just a little bit, although this delayed response may have been to my advantage as the hornets did not perceive my slower exit out of the area as much of a threat and instead went to attack the woman running and screaming obscenities.
Posted by Carolyn at 10:22 PM