Ah! So that’s why they make small bales.

We used to buy our hay in small square bales, but at $4 a pop (and that was relatively cheap), it wasn’t very cost effective.  So a few months ago, we bought our first round bale.  At $39 it was cheaper, but obviously it was much, much larger than what we were used to dealing with.  We put the bale in Ms. Melman’s barn on its side and I would peel away layers.  Definitely not easy to work with as now I had to grab a bunch of loose hay instead of picking up the flakes on the square bales.  We ended up buying a total of three round bales.  Ms. Melman and Nugget went through one bale in just under a month and they are about ¾ through their second bale.  The goats have only eaten about a third of their bale.


I had to stop at the feed store to get more goat chow so I checked to see if they had any more round bales left.  I was a bit nervous as it’s getting late in the season and still several months away from haying here.  They had one round bale left, but it had seen some water damage & was moldy on one side.  Mold is not good for anybody, even mules who can eat some of the poorest roughage.  The feed store did have four big square bales left.  They were $50 instead of $39 (for the rounds), but they were also supposed to be another 150 lbs. heavier.  So I paid for a large square and had Paul pick it up later that afternoon.  A large square measures 4’ x 4’ x 8’ long; a convenient size for those that have a pickup truck.  What wasn’t so convenient is that you just can’t roll this bale out the back of the truck like we did the rounds.  The feed store picked it up with their forklift & kind’a shoved it into the truck bed.  We had to figure out how to get it out of the truck bed when we brought it home. 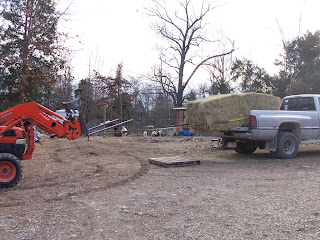 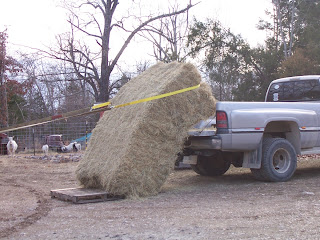 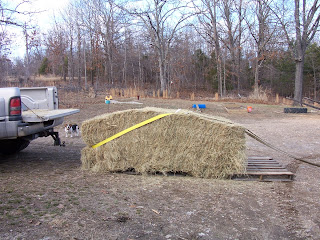 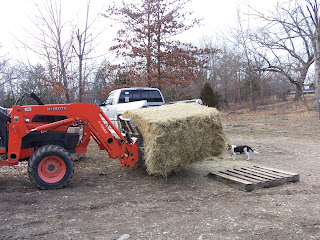 If it weren’t for the fact we had a tractor, I’m not sure how we would have done it.
The bale is at the house now.  But it needs to be in the Mule Barn up the road.  There won’t be enough room in the barn until they finish the round bale, so Paul set the new square bale on a pallet & tossed a tarp over it and he’ll tractor it up to the barn when they’ve finished the round bale.  We’re going to have to somehow shove it sideways into the barn as we can’t get the tractor into there.  That should be interesting.
Posted by Carolyn at 8:50 AM