Lookie what I got!

I’ve been wondering what I was going to do about lighting for the seedlings as they have been planted for a few days now.  I’ve been going back & forth about just setting the light between two bookcases then setting the seedlings underneath them on chairs or making a break-down light stand using some PVC tube.  Got the idea from a blog I follow.  Click "Here" to see it.

But this morning I woke to the sound of the electric drill and saw this: 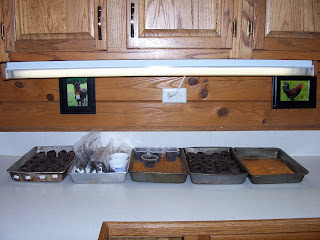 Paul had taken a two-tube fluorescent light fixture and mounted it underneath a section of kitchen cabinets!
I think it’s a great spot for them as the sink is just to the right for easy watering, the countertop is easily cleaned if any spills occur and I really don’t use that part of the counter for anything other than the chicken bucket & collecting stuff that I haven’t put away yet.
I'll have to use some boxes or something to bring the seeds up closer to the light.  And as you can see, I have room for another two trays – or fifty peat pellets – of more seeds!  Now I just have to see what other plants I want to start.  I’m having a hard time controlling myself though as it’s still too early for some of the veggie seeds and I’ve also decided that the squash will be just as well off being planted directly in the soil in a few months.
I think Paul was assuming that I’d have him take it down after the plants are outside, but I’m thinking that I may keep that light there permanently.  Then I could have a bunch of small potted herbs inside all year long.
Maybe I can start some herbs or flowers.  Or more tomatoes and peppers.  How many peppers plants are too many???
More importantly, what are you planning on growing this season?  Need I remind you that you are going to be griping about the price of veggies at the store?
Don’t complain……ACT!  Pick up a packet of veggie seeds on your next trip to town.  You can buy a 25-pack of peat pellets and four different varieties of vegetables for under eight bucks.  And that’s assuming you paid full price (which I know you didn't!)
Posted by Carolyn at 1:02 PM