A lare part of raising livestock involves frequently focusing on the back end of animals. 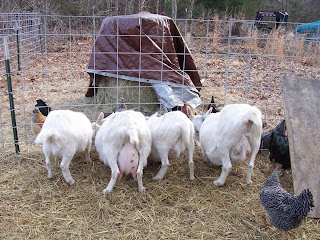 Nettie, our Saanen doe, was bred last October and is due to kid in three weeks.  But for the past two weeks, her back end has been swollen and pink.  Something that normally happens only during a heat cycle or just before giving birth.  Since I’m pretty sure that she was successfully bred, I was a bit concerned that she had some sort of infection.  So I took her temperature -another lovely chore having to do with the backside of the animal - and it was within the normal range (101.5 to 103.5).  She hasn’t been acting odd and hasn’t been off her grain or hay, so I’m at a loss as to why the puffy / pink rear.
The other possibility I was afraid of is that she may prematurely kid.  So I’ve been checking on her about half a dozen times during the day and feeling her ligaments.  Basically, you feel for a loss of muscle / ligaments on either side of the root of the tail (yep, right above the butt.  I told you there’s a lot of butt-stuff going on here).  If the ligaments are “missing”, it’s a sign of impending labor.  Those ligaments loosen up to make it easier for the kid to pass through the birth canal.
Well, her ligaments seemed to be loosening up yesterday morning, but when I made my last goat-butt-check, they were back again.  Or I’m just thinking that I’m feeling a loss of ligaments.  I was going to ask Paul to check, but since he hasn’t felt her recently I don’t think he’d be able to tell.
So I’ll be reviewing rear ends again tomorrow.  And the next day.  And the next.  Until she finally kids.  Oh, then I get to do it over again three more times for Annette, Ishtar and Cloud.
Posted by Carolyn at 5:12 PM