I made barley & vegetable soup on the wood stove yesterday afternoon.  What a great way to warm up from the cold outside; a hot bowl of homemade soup and bread. 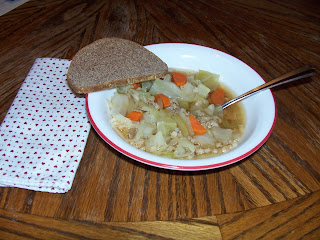 I used the last two quarts of the chicken broth we canned in the fall of ’09, a cup of barley, four carrots, three stalks of celery, an onion and about a ¼ head of cabbage.  It turned out to be more of a stew than a soup though as there were so many veggies and so much barley that there was very little broth.  Not that anyone complained.
We had the barley & veggie soup for supper with the last of the sourdough bread and I put ½ the remaining soup in the fridge for Paul’s lunch today and the other ½ in the freezer for a quick meal (i.e. when I forget to make anything for supper).
Also made another Cheap Meal tonight; Spanish Mac & Cheese with Polenta and Pinto Beans. The Spanish Mac & Cheese is just macaroni in a cheese sauce with a can of diced tomatoes & chilies added to it.   Paul said we may have another ½ hog in the freezer soon so I had to “get rid” of some of the bacon ends.  I fried up the bacon with some onions & cooked it with the beans.
I’m glad that we’re able to get our meats locally.  The hogs & steer come from two of Paul’s coworkers; we raise our own Cornish x chickens, butcher the male goats and try to get a deer or two each year.  Then there’s also the occasional squirrel, although I didn’t get any this year because I saw so few.  Not sure if the bobcats have been taking them, although that may explain why I haven’t lost many chickens this year.
Technically we should be able to have a freezer full of fish, but Paul hasn’t had much free time to go fishing.  I’ll have to “make” him go when the weather gets nicer.  I’m not crazy about the rainbow trout unless it’s smoked, but hopefully he’ll find a good fishing hole on the lake and hook us some crappie or a walleye.  Or catfish.  Or bluegill.  Heak, I’ll take just about any fish, batter & fry it up and serve it with a plate full of hush puppies and green tomato / onion relish.
Posted by Carolyn at 8:34 PM