This has been, by far, the longest kidding labor I've ever attended.  Nettie started talking and hunching her back around Noon today.  She was out of the kidding stall for the morning and I figured I'd let her stay out until she started getting down & dirty about labor.

I swear she was going to have another quick kidding.  Or maybe it was just wishful thinking.  She was having pretty regular contractions since about 1 o'clock.  But then she'd just completely stop.  I'd walk her around some to get things moving again and then she'd have a few more.

This lasted throughout the afternoon.  And through suppertime.  And getting darn close to bedtime.  Finally just before 8 o'clock she starting having really hard and fast contractions.  Normally she'll lose her mucus plug several hours before kidding, and her water will break before the "bubble" shows.  But this time she held on to the plug and water (or whatever you call that other water thingy other than the birth sack) right up until I saw the kid.  He was presented correctly, although Nettie was having quite a hard time.  He was in the "diving" position, but I ended up helping her along just a bit by gabbing hold of the front feet and gently pulling as she had her contractions.  I knew it was a male before the sack even broke because I could already see the horn buds on his skull. 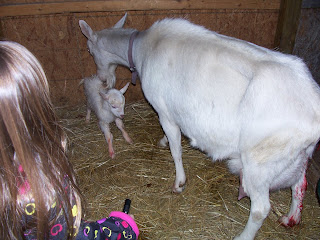 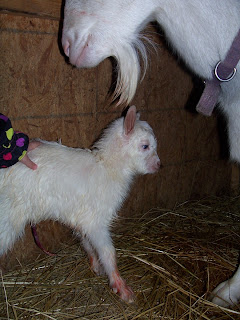 If there isn't another kid, this will be the only time Nettie has kidded with only a male.  I guess I shouldn't complain.  The first two years she gave me a single doeling each time.  The third and forth years she had twins - one doeling and one buckling.  The fifth year she had triplet doelings.  Not a bad female to male ratio.

The little guy was happily nursing when I left.  It's only supposed to be in the mid-30's at night so I had to put him in my homemade-five-minute-butt-ugly-goat-coat: 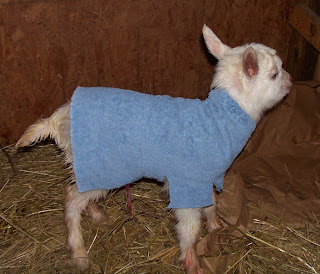 Warmth was the main objective.  Fashion was obviously a second thought.

I'm off to bed before I do a face-plant onto my laptop.  Goodnight all!
Posted by Carolyn at 9:59 PM