....and more likely than not, my only quilt, was finally finished last week.

I have a girlfriend back "up north" who just recently celebrated her birthday.  About a month ago, I was racking my brain for some sort of gift to send her.  We usually don't exchange birthday gifts, but she is constantly sending Rhiannon books and clothes and I just never know how to repay her.  Then in January (about a month before her birthday) I had this insane brilliant idea that I would make her a lap quilt for her cottage get-away.  I found a picture of their living room and figured I would make the quilt to match that room and the bright red couch, so I was off to do some fabric hunting.

I love shopping for fabric!

Except it took me like two whole weeks to find the colors I wanted.  Mom was with me on most of the trips and I think I about drove her nuts.  I found several fabrics that I just loved, but then couldn't get three of them to look good together.  I originally wanted to do a red, blue and green block pattern, but after going into every fabric store within a 25 mile radius I just couldn't find what I wanted.  I think the employees were told to keep an eye on me because I was not only in each store several times, but was shifty-eyed, anxious and unsettled while in the store.  The signs of a thief, or signs of a frustrated and burned out fabric shopper?  I finally settled for just red and blue Batik and a Mossy green.

Because if I saw another bolt of fabric I was going to vomit. 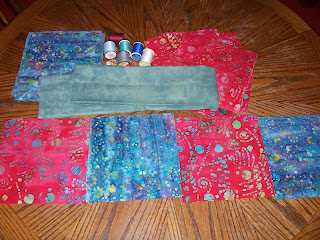 My Mom has been quilting for a few years now and she has all those nifty little quilty helping things like the wheelie-bob cutter, plastic squares, rules and the squishy mat for cutting.  With her help I cut out the main blocks for the quilt, nice and square.  How the hell did people do this before the wheelie-bob cutter?  There's no way that you can get anything square with just plain ol' scissors.  Mom showed me how to sew the blocks together and I was pretty happy at how quickly it went together and how nice it looked.

I wanted this quilt! 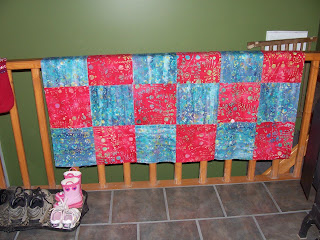 I still didn't have a backing for the quilt, so back to the fabric stores I went.  Of course, I then found a green Batik that would have gone with the red and blue blocks.  But the hell if I was going to rip out the stitches for the work I already finished so I just settled on using the green I already had as a border strip.  I picked out a blue flannel for the backing.

This quilt was going to look awesome!

Putting on the green border wasn't as difficult as I had imagined.  Neither was getting the front, batting and backing sewn together (although I did cheat and used some fabric adhesive to keep the pieces from moving all over).  There were some puckering problems, and I admit that some swearing accompanied the actual "quilting" of the blocks.  At first I wanted to use a fancy patterned stitch for the quilting, but the foot of the machine kept hanging up on the flannel backing.  I tried several fancy stitches before finally giving up.  I had taken out no less than three-thousand-eight-hundred-forty-two stitches with the seam ripper.  My eyes were beginning to tear up half-way through taking them out, not sure if it was because I was straining them too much or because I was going to have a breakdown and just uncontrollably sob.  I ended up using just a straight "stitch in the ditch".  Good enough.

I loved this quilt! 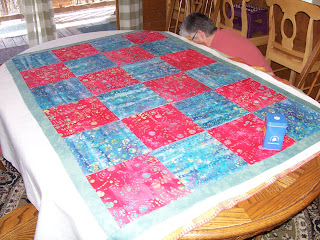 The binding, however, was a frekking nightmare.  At first, I thought I was going to use a red binding.  Mom said how easy it was to make binding, but I was going to go the really easy way and bought some pre-made binding.  No cutting, no ironing, just bam!, put the binding on and sew away.  Except when I laid the red binding on the quilt I didn't like the look (yes Mom, I know you liked it, but too bad, I didn't).  I tried to like it.  I reasoned that it really didn't matter.  But I just couldn't embrace the red binding and it drove me nuts.  So I threw the easy-peasy pre-fabricated binding in my fabric bin and asked Mom to show me how to make binding.  Since I liked the green border I decided to use the same material.  I guess making the binding isn't really that hard (of course, assuming you have the wheelie-bob, an iron and my Mom) but I was still distraught that I wasn't able to go the really easy route and just use the store bought stuff.

Mom.....will you finish this quilt for me?

I hated the homemade binding.  It wasn't as stiff as the other stuff and we had to piece a bunch together to get the correct length.  There were also six hundred straight pins required, at least half of which ended up being run through my fingers or thigh and causing much blood loss.  I also made a slight binding error so we had to do some creative folding and tucking to get it to look halfway decent.  At this point I would have used a store bought binding even if it was cat-puke-Meow-Mix-orange; I didn't give a rat's ass what color it was just so long as it wasn't the homemade stuff I was working with.

I couldn't wait to finish this quilt. 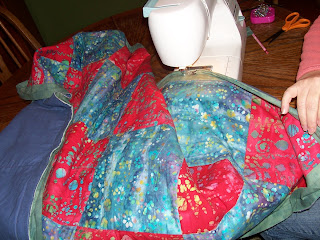 Then there was the thread color.  The thread was a little too bright and didn't blend into the green border, so I figured if we were going to see the thread, I may as well make it stand out like I had wanted it to be seen (brilliant logic, hugh??).  So I tried the fancy stitch pattern again and it worked ok as it didn't have to contend with the flannel material anymore.   It was difficult to get going, but after a while it worked out.  Not perfect in any way, but it served the purely functional purpose of holding the edges together and hiding the raw seam underneath.

I wanted this quilt out of my sight.

Finally finished, I shoved the damned thing in a box packed it up lovingly and sent it off to my friend for her belated birthday present.  I hope she likes it.  I hope it matches her cottage living room.  I hope she doesn't notice the obvious quilting technique faux pas and evident sewing mistakes made purely in an act of desperation.

I hope I never see that stinking quilt again. 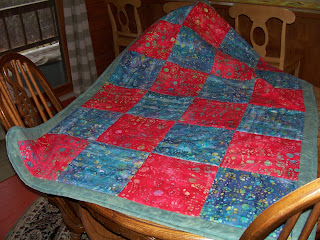 I'm going to go crochet something now.
Posted by Carolyn at 12:29 AM