The news guys have been warning us for the past three days that we were in for a Sleet / Ice / Snow storm.  Figures.  The past few days have been in the mid to upper 60's.  What better way to usher in an ice storm than with weather requiring one to wear a t-shirt and shorts while doing barn chores....and then two days later have you bundled up in your Carharts hacking ice from the animal water tanks with an ax?

I guess we're due for a nasty ice storm, although I wouldn't have expected it this early in the season.  The last one was in 2009.  It was our first ice storm since moving here.  Mostly just a big inconvenience for us, but truly a nightmare for a lot of other people.  A home just a few miles from us burned to the ground because the fire trucks couldn't make the drive up / down / around the hills in the subdivision with the thick layer of ice on the road.  People farther out in the country were without power for over three weeks.  We went thirteen days without power, although we did have a generator to keep the large freezers from spoiling all the beef & pork we just filled it with (of course) and a wood stove for heating the house.

Knowing what could happen if we did get hit with the storm, I've been outside the last two days getting things in order.  A lot of the chores should have probably been done already, but what can I say?  I work best under pressure (i.e. I'm a lazyass).  Got the wood piles covered with tarps.  Moved wood to the porch and filled up a pallet with even more wood and moved it closer to the house. 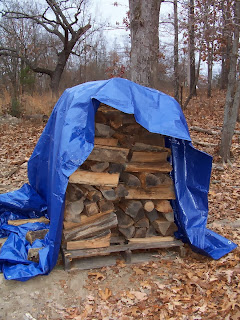 Extra bedding in the chicken coop & goat huts.  Closed up the barn windows.  Made sure tarps were over the hay hoop houses.  Topped off all the water tanks / buckets / pails.  I even made a hillbilly makeshift cover for the "feeding" hay (as opposed to the stored hay).  Because you know, if the hay gets wet, or iced or even the slightest bit moist, the goats won't eat it.

This is something I've been meaning to do forever, but the thought of having those picky bugger goats turning their nose up at hay with snow or ice on it (or even close proximity to it) had me scrambling to do something - anything - to cover it up.  So I scrounged up half a cattle panel, a t-post, some bailing twine and used plastic sheeting and came up with this:
In reality, an extended power outage isn't that traumatic for us because we're kind of prepared for it.  The generator will keep the freezers going.  We have access to city (i.e. running) water just up the road.  Plenty of flashlights & oil lamps.  Wood burning stove for heat & cooking.  The biggest problem is taking care of the livestock.  Water will have to be hauled several times a day to the goats / chickens, but that isn't very far from the house.  Ms. Melman and Nugget, however, are pastured a mile up the road.  And if the ice is bad, even the truck won't be able to make it up the big hill to the barn.  So even though there is city water at the barn, there's the possibility that I'll have to hike up there to make sure they have adequate water, and, if the electricity is out the tank water heater won't work so ice forming in the buckets will be a problem.  But I guess we'll take that task on when we come to it.

In the meantime, I think I'm going to vacuum the rugs again and make sure there's no dirty laundry or dishes.  And maybe make another couple loaves of bread.  And if we manage to somehow avoid all this snow / ice, at least the house will be clean!