We ended up with around 8" of snow on top of a solid 1" of ice pellets.  My hillbilly hay shelter hadn't collapsed and I was rather surprised it didn't after brushing off the snow & cracking the thick sheets of ice off it.  The hoop hay tunnels, however, did not fair as well: 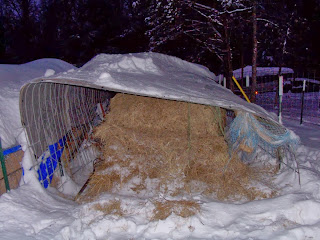 I brushed off what snow I could reach and whacked the tarp to get as much ice off as possible.  But even after getting a lot of the snow & ice off, it still didn't spring back to it's original shape.  I never really considered the hay tunnels having to withstand a snow load.  But at least the materials are still usable.

Our area in general was hit pretty hard, although still not as bad as it could have been if freezing rain had replaced the ice pellets.  The weight from the sleet/ice/snow have destroyed a lot of the local docks; the entire structures sinking and the roofs collapsing. 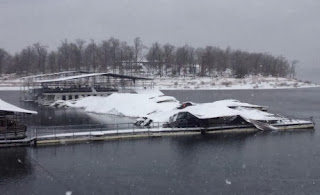 A few businesses found their storage sheds had collapsed.  Luckily they were closed and there were no employees hurt.  And of course there's the jack-knifed semi-trailers on the road and vehicles that had slipped into the ditches.  But I don't think there have been any serious injuries.  We're still not out of the woods as there is a chance of more snow/sleet/freezing rain tonight and tomorrow and honestly, I'm still waiting for the power to go off.

I spent half the day inside feeding the wood stove, and the other half trudging through the snow to haul warm water to the goats / chickens.  But even through all the snow and cold, I had my constant barn chore companion: 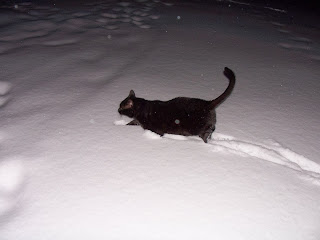 Outside Kitty is such a good little boy.  He follows me when I pitch out hay, around the barn to feed everyone, inside the milk parlor (hoping for a cup of warm goat milk) and then to bring in more firewood.  I haven't managed to make a proper kitty house for him yet, but he does have a box with a blanket and heating pad in it and it seems to be doing an ok job keeping him toasty in this unseasonably cold snap. 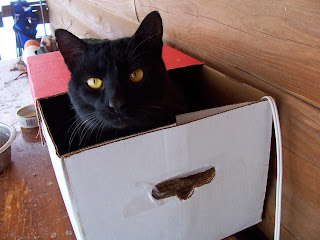