Since the day he was born, Pickles' male kid has had a problem with his front and hind legs.  His back hocks would hyperextend like he was double-jointed and his front legs splayed out to the sides.  This made it impossible for him to nurse so Paul and I held him up to Pickles every few hours so he could get some milk.  To make things worse, as the hours and days wore one, Pickles seemed to ignore him more and more, making it even more difficult for him or us to get milk into him.  He was significantly smaller than his sister at birth and was now dependent on us going out to the barn to help him nurse so was not gaining weight as quickly as she was.

I've read about white muscle disease, an ailment resulting from lack of selenium and vitamin E.  During most of the year, but especially for the last few months of the does pregnancy, I top dress their feed with a Selenium & Vitamin E powder.  I'm not sure if I wasn't giving them enough, if it was just the fact that Pickles kidded a week early or if they even had a Selenium deficiency in their diets.  I posted the question on a goat forum and several people said that they've had kids with the same problems but that in a few days the kids improved on their own or they were given a shot of Bo-Se (an injectable form of concentrated Selenium and Vitamin E).  Some even splinted the front or back legs to help the kids stand until their tendons tightened up.  So Paul splinted the back legs and seemed to be able to stand better. 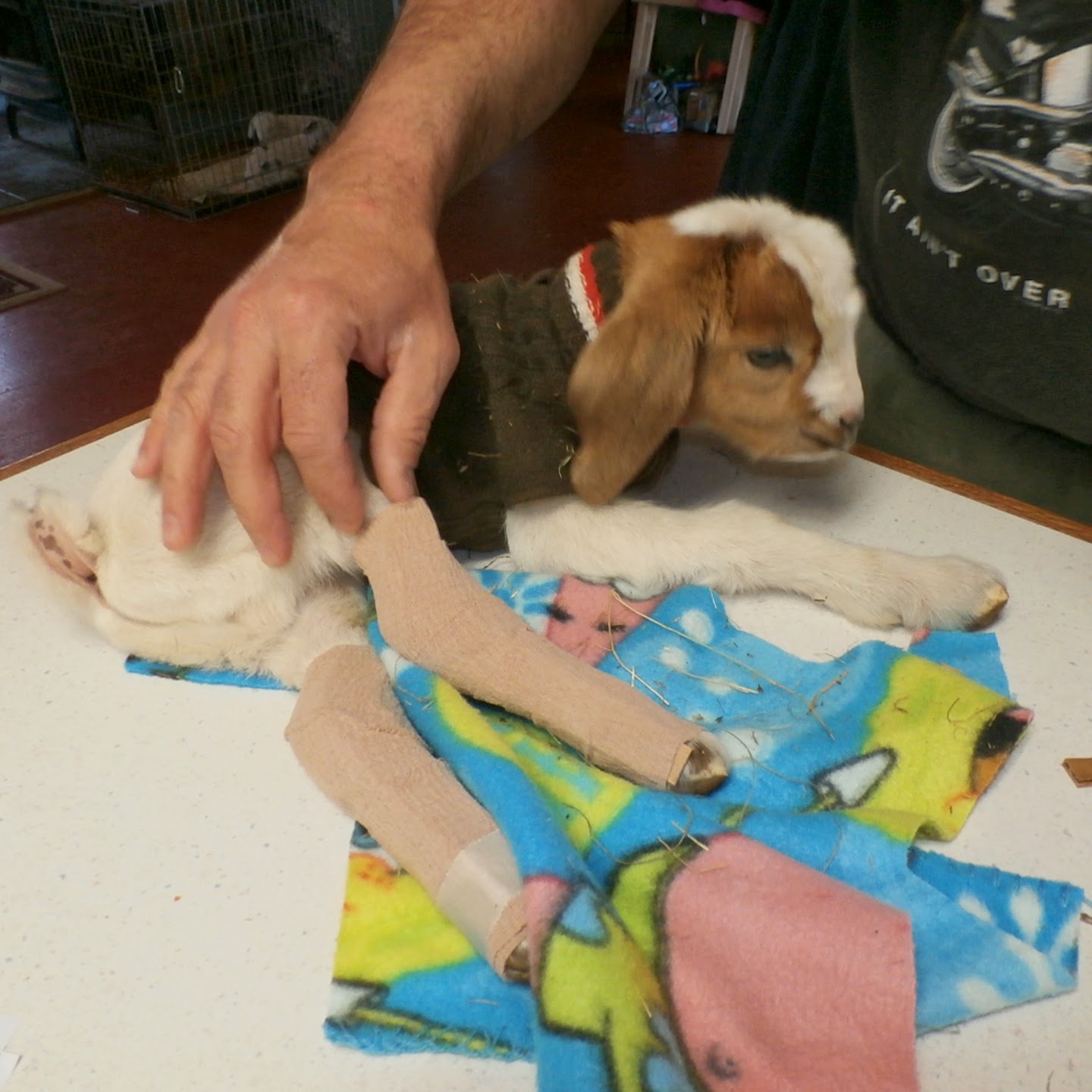 The splints failed after a day or two because of the constant urine soaking they received (they were only made from cardboard stiffeners).  We took the splints off and hoped that being forced to use his legs would strengthen then up.  Which it did for a short time, but then he seemed to regress back to his helpless stance.  Paul put another pair of plastic splints on his back legs and we hoped for the best.

I really wanted to try getting some Bo-Se into him, but for whatever gawdforsaken reason, it is available by prescription only.  Add the prescription problem to the fact that I couldn't get out of the house for five days because of the ice on the driveway and it was almost two weeks before I could get out to get the Bo-Se shot.  And in order to get the Bo-Se shot, I had to practically beg the vet to sell it to me.  As soon as I could get out of the driveway, I ran out to the vet's office and picked up the single 2mL dose.  I wasn't sure if giving him the shot at this point was too late, but spent the $12 on the shot (and luckily didn't have to spend an additional $45 on an office visit).  If I had to bring him in for an office visit, I would have just said forget it and we would just kill him.  It sounds heartless, but he is obviously not a "keeping" goat, so would have been wethered anyhow and end up in the freezer.  He is not an animal that is worth the financial drain.

According to my internet research, his situation should have visibly improved within 24 hours of the shot.  Which it didn't.  So we took the second pair of plastic splints off and prepared to end his (and our) suffering.  But then Paul suggested making him a sling.  We had been slinging him with a towel around his midsection in order to give his legs a work out, but it wasn't working well and we just weren't out there long enough and often enough to make it effective.  Paul cut an old pair of jeans into an improvised harness and we tied him up to the rafters of the barn where he could "stand" unsupervised. 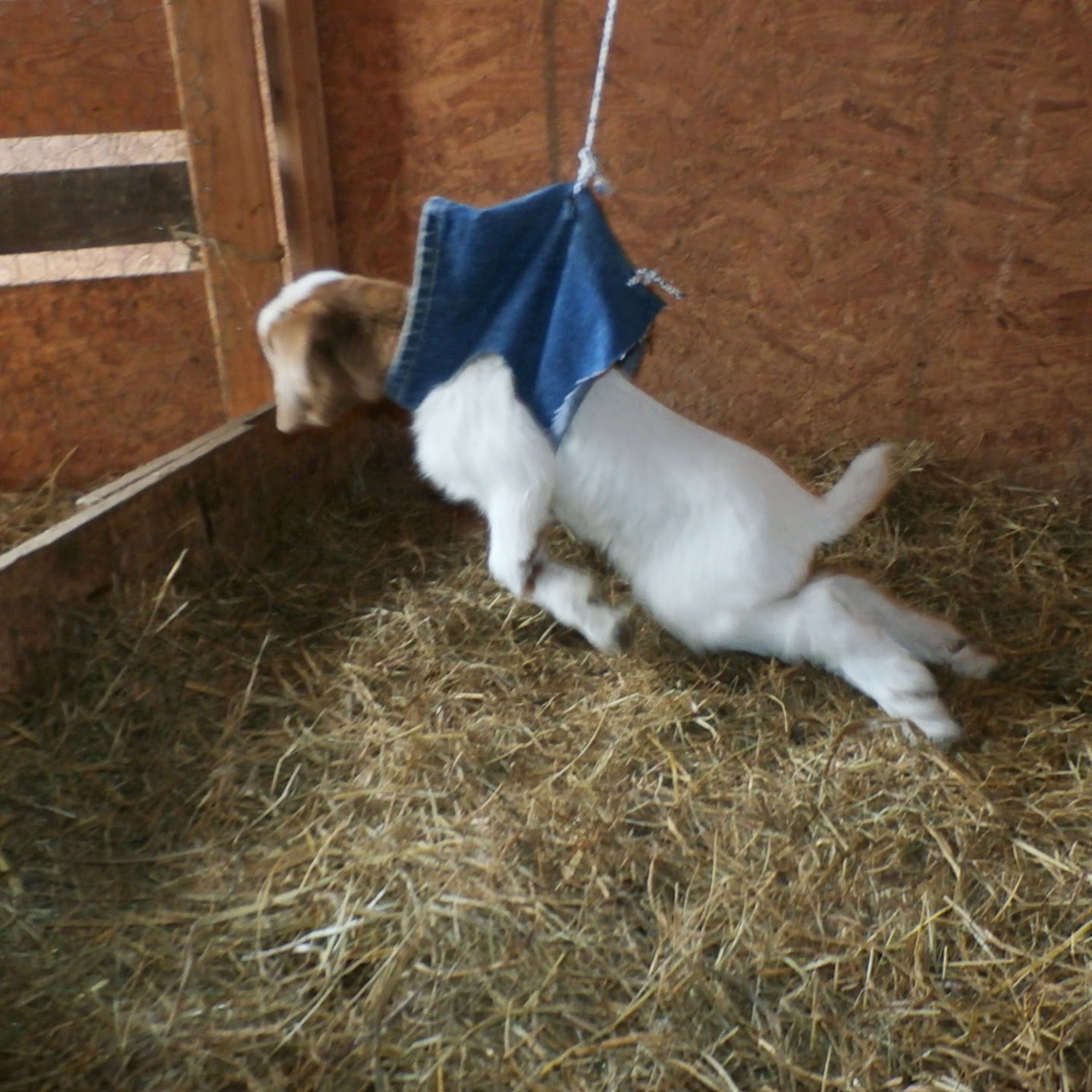 I left him in his sling for several hours during the day, took him out to rest, put him in it for another few hours, then took him out of it for the night.  On the second day of slinging he did seem to improve a bit.  But honestly, not enough to make all this fuss over him worth it.  Since Pickles still had to be held in order to let him nurse we were still constantly going out there to let him nurse.
At one point I think were were just about to commit to putting a bullet in his skull but then I said, "lets wait one more day".  And in that one day, there was an improvement.

I'm not sure if the Bo-Se finally kicked in, if the daily doses of Vitamin E were helping, if the splints helped or hurt, or if the sling helped or hurt.   But he was able to stand, still very much splayed out, but he was gimping his way around and following Pickles with much eagerness.  And Pickles continued walking away from him, adding to my eagerness to smack her upside the head.  So even though I have to hold her still for him to nurse, at least I didn't have to hold him up.  His front legs are still splayed out, so we hobbled them together a bit.  He took to the hobble quickly so is moving around quite well, albeit in a very gimpy fashion. 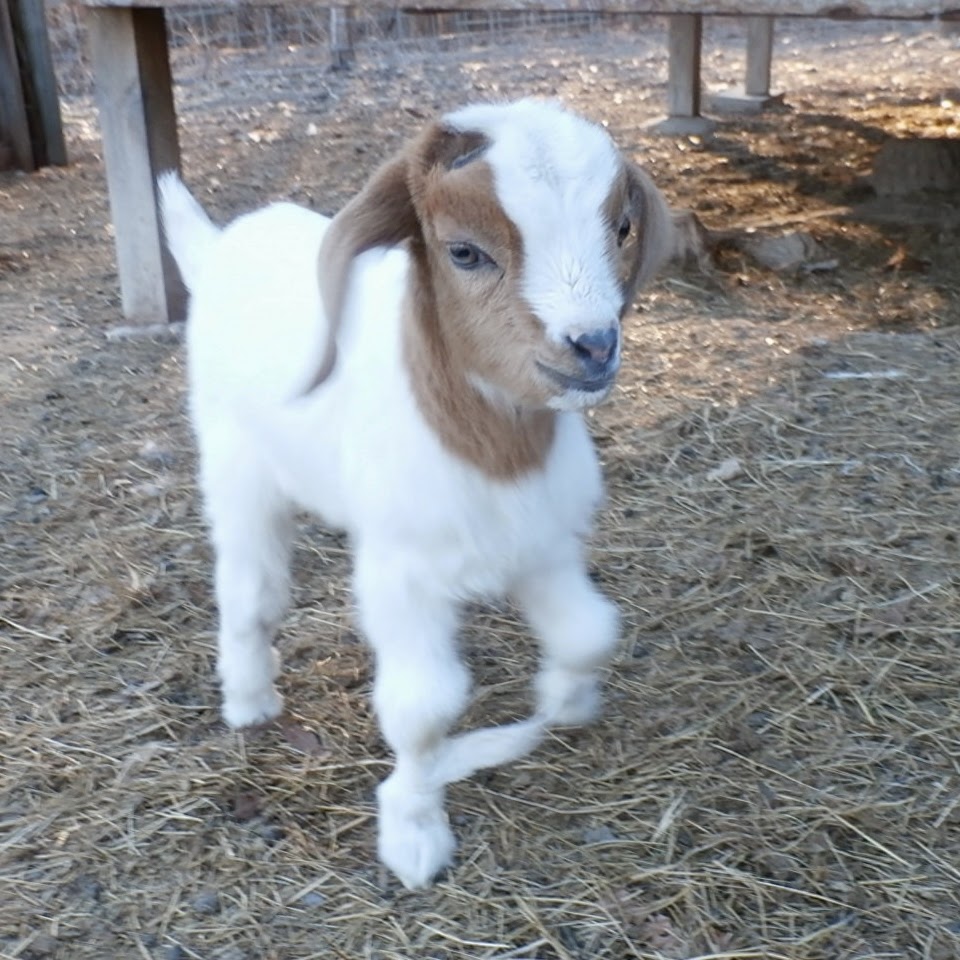 Pickles daughter is doing fine because she is physically able to keep up with Pickles when she moves away, but we're still going out there to make sure gimpy is getting milk every four hours. All this hassle and extra expense just to keep him alive long enough to eventually end his life eight months later via a lead projectile to the brain.